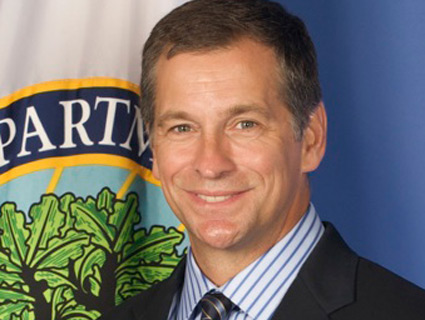 Here are some of the lies that conservative activists, fundamental religious groups, and Fox News commentators like Sean Hannity spread about Kevin Jennings during his two-year tenure as head of the Department of Education’s Office of Safe and Drug Free schools:

The nasty attacks even prompted 53 Republican members of Congress to demand that President Obama fire Jennings. In October 2009, they wrote that he was unfit for the job thanks to his playing “an integral role in promoting homosexuality and pushing a pro-homosexual agenda in America’s schools—an agenda that runs counter to the values that many parents desire to instill in their children.”

Jennings, ironically, had joined the administration to help combat bullying in public schools only to find himself a target of relentless attacks himself. The Jennings hatred on the right ran so deep that Federal Protective Services began monitoring death threats and advised him to assume that every time he went out, someone was following him.

Jennings was among the lowest-level Obama administration official yet to be singled out for such treatment. But unlike others such as green jobs “czar” Van Jones or Shirley Sherrod in the Department of Agriculture, who were also heavily targeted by right-wing media outlets, Jennings stood his ground, and Obama backed him up. But now, after two years, Jennings has left the administration on his own terms, having won over at least a few critics and earned many more admirers. In a recent interview with Mother Jones, he was finally able to speak freely about being such a high-profile target of Fox News and the religious right.

“It was an awful experience, I’m not going to lie,” says Jennings, who left his post in June. “There were moments when I wondered why anyone goes into public service in America.” But his partner Jeff Davis told him, “You’ve spent your whole life fighting bullying. You’re not going to give into bullies now.”

So he didn’t. “I knew that if they destroyed me, it would make it impossible for any gay person after me to hold a job like this again,” he explains. “In the end, I was determined that the best thing I could do was to deliver the results. It wasn’t until much later that I realized how stressful it had been.” Despite the stress, though, Jennings wants his attackers to know: “At no point did you ever disrupt my ability to do my job.”

After nearly two years at a job that kept him away from his partner and their life in New York, though, Jennings is returning home to head Be The Change, a nonprofit group committed to addressing the rising tide of economic inequality in the country. There, he hopes that his “social entrepreneur” skills will bring the same sort of attention to the issue of inequality that they did to bullying in the schools, so that a child’s zip code doesn’t necessarily determine the course of the rest of his life.

If Jennings is even half as successful focusing on inequality as he was with bullying, he is likely to become a formidable player in the ongoing public debate about how to close the growing gap between the richest one percent, and well, everyone else.

Raised in Winston-Salem, North Carolina, Jennings himself grew up below the poverty line. His father was an itinerant fundamentalist minister in the South who died when Jennings was eight. His mother, who never made it past sixth grade, supported the family working at McDonald’s and cleaning houses. But she had an intense desire to see her children educated; Jennings made it into Harvard, becoming the first of 46 cousins to go to college. Now, he wants to make sure all poor kids have the educational opportunities he did.

“I want my story to become the norm, not the exception,” he says. But he worries that the country has become more stratified than at any time since the Gilded Age. “When you have inequality without mobility, pretty soon you’re a caste society. We’re well on our way to being a caste society,” he says.

“I knew that if they destroyed me, it would make it impossible for any gay person after me to hold a job like this again,” Jennings explains.

Poverty was not Jennings most dire challenge as a kid. He was the victim of intense anti-gay bullying. He ate lunch in the hallway every day, and walked rather than ride the bus to avoid his tormenters. In 11th grade he considered suicide.

He survived but did not forget. After graduating from college, Jennings became a history teacher, and the faculty advisor to the country’s first gay-straight student alliance. He then created a national organization called the Gay Lesbian and Straight Education Network (GLSEN) that cultivated gay-straight school clubs around the country. By the time Jennings left GLSEN for the Department of Education, there were more than 4,000 such clubs.

The week he was asked to join the Obama administration, a sixth grade boy in Springfield, Massachusetts, named Carl Joseph Walker-Hoover committed suicide. Only 11 years old, Carl had been the victim of intense bullying at school by kids who thought he was gay. When I met Jennings in June at the first federal youth summit for lesbian, gay, bisexual, and transgendered youth, Jennings was wearing a button with Carl’s football photo on it. “I could have been Carl,” he says.

And Carl was only the beginning of a rash of well-publicized suicides by gay kids last year—a tragedy that, paradoxically, helped Jennings and other activists bring the issue of anti-gay bullying out of the closet. In the past year, a national movement to make safer schools has exploded, encouraged by such other factors as sex columnist Dan Savage’s “It Gets Better” video campaign that encouraged gay adults and others to record messages about the ways their lives improved once they escaped from high school. Jennings notes that even the Boston Red Sox made a video, a sign that the movement he’s helped energize has made bullying “socially unacceptable,” in the same way the view of sexual harassment has changed since the 1950s.

In March, his office helped convene the first White House Conference on Bullying Prevention, headlined by the president and Michelle Obama. There, Carl Walker-Hoover’s mother privately met with President Obama. “That was kind of my hair-on-the-back-of-the-my-neck moment,” Jennings says.

Not long after Jennings joined the Obama administration, there was a horrific incidence of violence against a kid on a school bus in Belleville, Illinois, that was captured on the bus security camera. The attack went on for a few minutes, but the bus driver never pulled over or did anything to protect the victim.

The video went viral, and struck a cord with Jennings. He understood the special nightmare buses can be for kids who are bullied. “For poor kids, you’re trapped on a bus and being tortured every day,” he says. So he contacted Mike Martin, the head of the National Association for Pupil Transportation. As it turned out, 90 percent of school bus drivers said they had witnessed bullying and thought they should intervene but had never been trained on what to do.

Martin was a bit shocked; it was the first time anyone from the US Department of Education had ever contacted him. “I was literally flabbergasted,” Martin recalls. By June of this year, the two had forged the first federal anti-bullying-intervention program for bus drivers.

“I’ve been working in and around government in my adult life,” Martin says. “I do not recall working with a public servant who has been as compassionate and as driven to really solve problems that kids face on a daily basis.”

Jennings’ work even earned him a grudging farewell press release from Parents and Friends of Ex-Gays & Gays, a group that advocates for the rights of “ex-gays” and for their work to be allowed in such places as public schools. The group noted that although GLSEN “rejects former homosexuals,” it had found Jennings to be surprisingly open-minded and inclusive. “I commend Mr. Jennings for affirming that his work to combat bullying in schools includes protection for ex-gays,” said PFOX board member Christopher Doyle.

Jennings, for his part, feels comfortable leaving the job knowing that he has essentially institutionalized the anti-bullying movement’s goals into federal policymaking. He was able to take the new job without feeling like he had caved to Fox News. “I felt like we had succeeded in mobilizing the resources of the administration to stop bullying…My contribution was to galvanize [the anti-bullying] movement and now that movement can move on without me,” he says. As for his critics at Fox News? “Victory is mine,” Jennings says with a laugh.