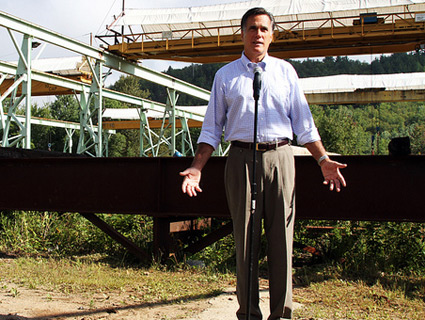 If you say that Mitt Romney flip-flops on the issues, you might as well be saying that Lindsay Lohan is sometimes fitted with an ankle monitor. It’s such an obvious, well-worn, widely noted fact at this point that it’s almost pointless to keep bringing it up.

The 2012 Republican presidential candidate has notoriously gone back and forth on gay rights, immigration issues, abortion rights, and even conservative Reagan-love. More recently, Romney couldn’t figure out whether or not he had said that Barack Obama made the Great Recession worse and “made it last longer.” (For the record, he did say all that.)

Now the former governor of Massachusetts can add this flop to the extensive and eclectic list:

During an August 25 campaign stop in Exeter, New Hampshire, candidate Romney said this, according to Holly Shulman of the New Hampshire Democratic Party: “You know, I think it’s kind of presumptuous for someone running for president to already, you know, have in mind who would be their vice president.”

Now here’s what the former Massachusetts governor announced at a fundraiser at the Virginia Beach home of Republican state senator Jeff McWaters on July 25, according to the right-wing website Bearing Drift:

Romney said that [Virginia Governor Bob] McDonnell has been an “incredible governor” and will be on “any candidate’s short-list” for Vice President…[H]e reiterated that the short list is “McDonnell, Governor Christie of New Jersey and Marco Rubio of Florida.”

I can already hear the conservative defense of Romney’s latest change of heart: “Stop nitpicking at everything Mitt Romney says or does, especially something so insignificant like thinking about VP picks! What about Obama’s flip-flops on the debt ceiling or closing Gitmo or Mubarak, and so on?”

Granted, no political party has a monopoly on their candidates conveniently changing their minds, and some of those criticisms of the president are indeed worth examining. But Mitt Romney can’t even decide whether he should decide to decide on his preliminary VP picks. Surely those on the Obama-loathing right, who can’t seem to get enough of calling the president indecisive, can see the irony in the fact that one of their 2012 frontrunners pulls this stuff so casually and so often, right? Right?