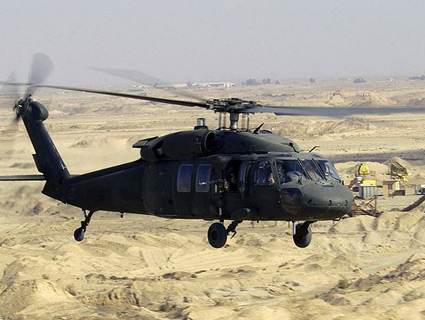 But Sunday’s news story regarding the aftermath of the bin Laden mission kind of reads like the Chinese got the last chuckle. US officials are claiming that, with the blessing of Pakistani officials, Chinese military engineers were permitted to take photos of and extract samples from the abandoned US Black Hawk stealth helicopter that crashed into the Abbottabad compound, according to the Financial Times:

“The US now has information that Pakistan, particularly the ISI, gave access to the Chinese military to the downed helicopter…” said one person in intelligence circles…The Chinese engineers were allowed to survey the wreckage and take photographs of it, as well as take samples of the special “stealth” skin that allowed the American team to enter Pakistan undetected by radar, he said…

“The Chinese would have enormous interest in this newfangled technology,” said [a senior US government official]. “They [Seals] did not blow the thing up for no reason,” he said.

The most depressing thing about this revelation wasn’t China’s speedy opportunism, the potential compromise of classified information, or even Pakistan’s knee-jerk betrayal. It was precisely that nothing about any of this was surprising at all. Allies or not, legal or not, everybody involved acted accordingly. Josh Vorhees of Slate bluntly and correctly described the news item as one that “[w]e all pretty much saw…coming.” Hell, Fareed Zakaria called this one back in mid-May during an interview on CNN (emphasis my own):

What would happen if we were to cut [off US aid to Pakistan]? They would harbor al Qaeda terrorists in their territory? They already do that. They would cooperate with other countries? They’re already telling the Chinese that they can take a look at the helicopter that went down. So everything that we feared that they could do, they’re already doing.

Along with the customary tension between US and Pakistani intelligence agencies, the chief reasons for the alleged cooperation with Chinese officials are glaringly simple: money and arms. China’s increasing willingness to provide both means the Pakistanis see it as a dependable ally—one they will need in the future, especially since powerful elements within the Pakistani elite operate in the framework of a future war with India. Reuters reports (emphasis my own):

Despite the billions in [American] aid, Pakistan still considers China a more reliable ally than the United States. China is a major investor in predominantly Muslim Pakistan in areas such as telecommunications, ports and infrastructure. The countries are linked by a Chinese-built road pushed through Pakistan’s northern mountains.

Trade with Pakistan is worth almost $9 billion a year for Pakistan, and China is its top arms supplier.

In the wake of attacks that left 11 people dead in the China’s western region of Xinjiang in late July, Pakistan dispatched the ISI’s Pasha to Beijing.

All of this news only helps to underscore the abysmal relationship between the United States and Pakistan, as well as Pakistan’s own cynical approach to strategic and national interests. Pakistan working against American security goals in the region is, and has been for quite some time, a sad cliché.