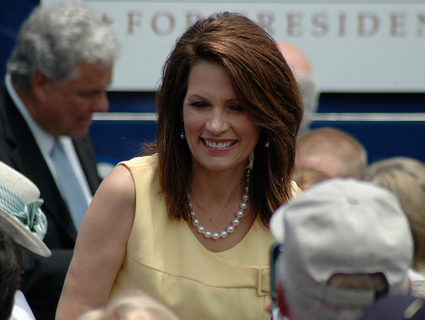 Despite her Iowa roots, Rep. Michele Bachmann (R-Minn.) is on pace for a third-place finish in the Hawkeye State.<a href="http://www.flickr.com/photos/teambachmann/5923469852/sizes/z/in/photostream/">Michele Bachmann</a>/Flickr

Public Policy Polling is out with a new survey of Iowa Republicans that’s good news for Texas Governor Rick Perry, bad news for Rep. Michele Bachmann, and just really depressing news for the rest of us. The main takeaway is that PPP sees Bachmann’s support in the critical first-in-the-nation caucus state slipping precipitously since she won the Ames Straw Poll earlier this month. Bachmann’s Ames victory came on the same day Perry entered the race, and since then, Perry seems to have picked up much of her support. The two are widely seen as competing for the same pot of socially conservative voters, but in a head-to-head contest between the two of them, Perry crushes Bachmann, 51 percent to 27 percent, with 22 percent undecided. From PPP’s Tom Jensen:

It’s clear that Bachmann has gotten virtually no momentum out of her victory in the Ames Straw Poll. She was in 3rd place when we polled Iowa in June and she’s in third place now. Beyond that her favorability numbers in the state have taken a significant hit. In June she had a 53/16 breakdown. Since then her positive number has dropped 6 points from 53% to 47%, and her negative number has climbed 19 points from 16% to 35%.

The news is just bad for supporters of fact-based reality. Although the number of admitted birthers plunged nationally following the death of Osama bin Laden and the production of President Barack Obama’s long-form birth certificate, a majority of Iowa Republicans still aren’t convinced that the Commander in Chief was born in the United States. Just 48 percent say he was, with 32 percent firmly in the other camp, and 20 percent still holding out for the long-long form birth certificate (or something).

The full diclaimer, as usual, is that it’s still early. Very, very early. Perry is currently riding the wave that comes with a high-profile announcement tour, but as we’ve reported, there are cracks in his armor that are likely to be exploited. And unlike standard primary states, Iowa’s caucuses aren’t straight-up popularity contests; they’re time-consuming affairs that rely heavily on organization. In other words: Don’t count Bachmann out just yet.