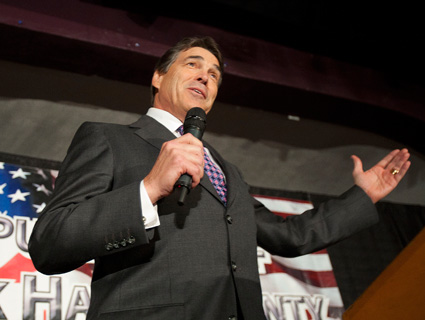 Earlier this month, George Seay III, the Texas finance chair for the presidential campaign of Gov. Rick Perry, found himself under scrutiny. Politico reported that Seay (pronounced “see”), the grandson of former Texas Gov. Bill Clements, had been soliciting Perry donations through his Dallas investment firm, Annandale Capital. Corporations are barred by law from donating directly to federal candidates or giving them in-kind gifts such as office space.

It wasn’t the first time that Seay’s political activities seemed to have run afoul of campaign laws. In July 2009, the George E. Seay III Foundation, a tax-exempt 501(c)3 nonprofit funded and run by Seay, gave $500 to the Legacy Political Fund, a federal PAC for which Seay serves as treasurer, according to the groups’ tax filings. The donation may have been peanuts, but federal law prohibits 501(c)3 groups from giving any amount to a candidate or PAC.

E. Philip Bush, an attorney for Seay, told Mother Jones that the donation was erroneously reported on the tax forms. In reality, he explained via email, the money had gone to the Mesa 1238 Educational Foundation, another 501(c)3. (According to its mission statement, the foundation nurtures “leaders who are working on issues related to cultivating compassionate conservative ideals.”) This kind of transfer, from one 501(c)3 to another, is perfectly legal. “At no time has either the George E. Seay Foundation or Mesa 1238 Education Foundation interacted with or provided any support to the Legacy PAC,” Bush said.

But that’s where where things get interesting. The Mesa foundation, which received $500,000 from the George E. Seay Foundation back in 2008, has close ties to the Legacy PAC. Mesa’s federal tax filing from that year, the most recent available, lists the Legacy Political Fund’s phone number, along with a web address that redirects to the PAC’s website.

“The fact that they share that information implies the activities are one in the same, which could raise questions,” says Aaron Dorfman, executive director of the National Committee for Responsive Philanthropy (NCRP). For example, a blending of the groups could allow donors to receive tax breaks for spending that is intended to influence the outcome of elections—a big no-no under federal law. “With the limited information available to me,” Dorfman says, “I am concerned that there may be wrongdoing in this case.”

Seay’s politically connected family has a history of using charitable groups for questionable political ends. George’s mother, Nancy Clements Seay, the daughter of Gov. Clements and an officer of the George E. Seay III Foundation, was a trustee of the tax-exempt Clements Foundation—a charity Gov. Clements ran out of his office during the 1980s but never reported on his public-disclosure forms. The charity’s point of contact was Clements’ state-paid executive secretary. In 1990, the Texas secretary of state suspended the charity for its failure to file a disclosure report. “The bottom line is that this provides a new way to hide [Clements’] business interests,” Tom Smith, the Texas director of Public Citizen, told the Austin American-Statesman at the time. “Why shouldn’t the governor be willing to list his family foundation?”

Mesa 1238 Educational Foundation, meanwhile, is located in the same downtown Dallas office suite as Seay’s Annandale Capital investment firm, according to the Mesa tax filing; the foundation was an investor in Annandale Capital funds and lost $46,000 on them in 2008. Mesa’s tax filings don’t itemize its funding sources or the recipients of its charitable donations.

The George E. Seay III Foundation’s $500,000 gift to Mesa was intended to fund an institute that would “encourage people of faith to give to those in need,” Bush explained. About half of the money was returned, he says, after plans for the institute were abandoned. (Officials from the Legacy PAC and George E. Seay III Foundation, as well as George Seay himself, declined to be interviewed for this story.)

The Legacy Political Fund is affiliated, via Seay’s involvement, with an influential social group of some 300 youngish, pro-business evangelicals that simply calls itself Legacy. Cofounded in 2004 by Seay and Dallas restaurateur and real estate investor Ray Washburne, Legacy hosts aspiring presidential candidates at a yearly summer retreat in Colorado, where they network with people “who have been trying to push along the conservative, free-enterprise cause,” Washburne told me. “If you’re running for president,” a close associate of George W. Bush told Time‘s Mike Allen in 2006, “it’s the place to go.”

Legacy is just one reason why Seay is well positioned to tap donors on Rick Perry’s behalf. He has cultivated deep connections to evangelical Christians through donations from his foundation, has donated land in Colorado for a popular Christian summer camp, and worked on Mitt Romney’s 2008 National Faith and Values Steering Committee. He leads the Associated Republicans of Texas, a group that raised $2.1 million last year, and aims to woo Hispanic voters to the GOP. He serves on the board of the Texas Public Policy Foundation, a politically active think tank similar to the US Chamber of Commerce. And he has fundraising experience as a former member of Romney’s 2008 Texas Finance Committee.

During the 2008 election cycle, the Legacy PAC raised $102,775, including $15,000 from Seay and his wife, according to OpenSecrets.org. It spent $27,643 that cycle on behalf of Republican congressional candidates and then-White House contender Sen. John McCain. Legacy PAC has not disclosed any political donations coming from Mesa. Another public filing, however, lists Mesa under an alternative name: Legacy Educational Foundation.

Operating closely linked nonprofit and political groups isn’t necessarily against the law. “National organizations that consist of a social welfare organization, an affiliated charity, and a PAC have the best of all worlds—they can engage in unlimited lobbying, financially support candidates for public office, receive foundations’ grants, and offer donors the ability to make tax-deductible gifts,” wrote Jeff Krehely, then-deputy director of the NCRP, in a 2005 article in Responsive Philanthropy. “Although it’s not difficult to set up these hybrid organizations, a degree of legal and accounting expertise is necessary.”

Still, Krehely also told me that Seay’s intermingling of groups seems legally dubious: “It sounds pretty bad, if not illegal.”