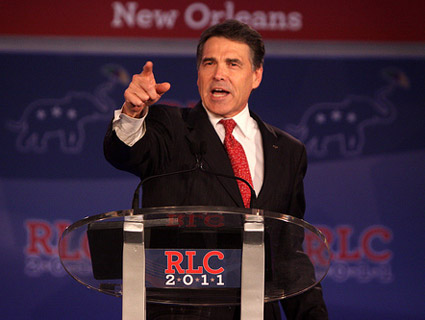 The climate skeptics can finally get excited about the 2012 election: Rick Perry, their candidate of choice, is about to officially throw his hat in the ring.

Perry calls global warming “all one contrived phony mess that is falling apart under its own weight.” Unlike many of the other GOP presidential candidates, he hasn’t expressed concern about climate change in the past, so he won’t have to do any back-pedaling. Notorious climate denier Marc Morano is a big fan: “Based on climate views alone, anyone who is holding their nose voting for Mitt Romney because there’s no other viable candidate will now rejoice to have an option with Rick Perry.”

The Texas governor will announce his intentions in the early primary state of South Carolina on Saturday, then head to New Hampshire and Iowa to rub elbows with all of the other aspiring commanders-in-chief. As a social and fiscal conservative, governor of a state that’s been adding jobs (even if they’re low-wage), and owner of a full head of lustrous hair, Perry is expected to swagger to the front of the pack in the contest for the Republican nomination.

Perry served as Al Gore’s Texas campaign chair in the 1988 presidential race, just before switching his party allegiance from Democrat to Republican, but conservatives don’t have to worry that Perry holds any residual affection for the former veep. “I’ve heard Al Gore talk about man-made global warming so much that I’m starting to think that his mouth is the leading source of all that supposedly deadly carbon dioxide,” Perry said in 2007.

Anti-tax zealot Grover Norquist, for one, isn’t concerned: “If Perry was president, one of the things I’d not worry about is a carbon tax,” Norquist told Politico. “I’d worry about big spiders eating New Jersey first.”

But plugging your ears and going “la la la la” doesn’t make global warming disappear. Perry’s state is getting absolutely hammered by heat and the worst one-year drought in its recorded history. The hot, dry weather in Texas is desiccating rivers and lakes, devastating farmers and ranchers, and driving wildfires that have burned up millions of acres. In the face of these crises—which are just what you’d expect in a climate-changed world—Perry proposes neither adaptation nor mitigation but rather supplication. He’s been praying for rain and calling on other Texans to do the same. So far no luck.

Perry also prays for a rollback of EPA regulations: “Frankly I pray for the president every day,” he recently told CBN News. “I pray for his wisdom. I pray that God will open his eyes. I wish this president would turn back the health-care law that’s been passed, ask that his EPA back down all these regulations that are causing businesses to hesitate to spend money.”

But Perry’s efforts to hog-tie the EPA haven’t stopped at prayer. Last year, his administration filed suit against the EPA to block the agency from regulating greenhouse gas emissions. The suit centered on claims that the so-called “Climategate” emails undermined climate science, though the whole Climategate faux-scandal has been thoroughly debunked.

Perry has also fought the EPA in defense of his state’s “flexible” air-pollution permits for oil and chemical refineries. And last month, Perry lashed out against an EPA rule that calls for reducing power-plant emissions that drift across state lines, calling it “another example of heavy-handed and misguided action from Washington, D.C., that threatens Texas jobs and families.”

As a Texas Republican, Perry is, of course, a friend of the oil and gas industry. He even stuck by BP during the Gulf of Mexico gusher, saying the well blowout was “an act of God” and insisting that he had “full confidence” in the company’s response.

Perry has cozied up to the oil-baron Koch brothers. In June, he flew off secretly to Colorado to speak at an exclusive closed-door meeting convened by the Kochs—even as his state was suffering through some of the worst wildfires in its history. In 2010, the Koch Industries’ PAC gave $50,000 to the Texans for Rick Perry PAC.

Perry is big fan of coal too. He tried to speed up approvals and smooth the way for a number of controversial coal-fired power plants proposed for Texas in the mid-00s.

On the greener side, Perry has supported the wind industry in Texas, which now has far more installed wind-power capacity than any other state, and more than all but five countries [PDF]. He also supports a $5 billion effort to build transmission lines from wind farms in West Texas and the Panhandle to the state’s more populous areas. As Tom “Smitty” Smith, head of the Austin office of Public Citizen, explains it, the fast-growing wind industry “warmed his market-based heart.”

Perry has been less supportive of solar energy, refusing to back a non-wind renewable standard that solar advocates have sought. With all the sun Texas is getting this year, that’s looking awfully short-sighted. The crippling heat has had residents cranking the air-conditioning and setting records for energy demand, leading on at least one day to electricity prices 40 times higher than usual. As Christopher Mims writes at Grist, “if Texas had a German- or Chinese-style incentive for its residents to install solar panels, it could save itself enormous amounts of money on sunny summer days, when high demand is matched by high output from solar panels.” And if the state adopted a suite of solar-promoting policies, it could do a better job of attracting and retaining solar companies, which currently are jumping ship to more solar-friendly states like California, according to a 2010 report [PDF] by the Go Solar Texas coalition.

It’s easy to see where Perry’s allegiances lie: He collected nearly $14 million in campaign contributions from individuals and committees associated with energy, natural resource extraction, and waste disposal between 2001 and 2010, according to the watchdog group Texans for Public Justice. His No. 1 donor over those years was homebuilder Bob Perry (no relation), an opponent of endangered-species protections. The No. 2 donor was Harold Simmons, owner of Waste Control Specialists, which has plans to build a highly controversial nuclear-waste dump in West Texas, near the nation’s largest aquifer, the Ogallala. Perry appointees signed off on the plans over the objections of state environmental regulators.

So, what would a Perry presidency mean for the environment and the country? “It would be a disaster in a lot of different ways,” says Smitty of Public Citizen, a long-time Perry watcher. Texans for Public Justice has put together a list of the many reasons why [PDF]—and there’s lots more where that came from.

This post was produced by Grist and is reproduced here as part of the Climate Desk collaboration.