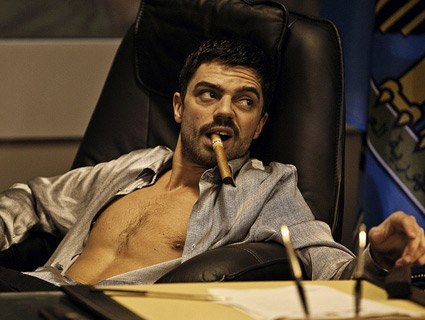 It’s terribly difficult to resist the premise of The Devil’s Double: The film is based on the true story of Latif Yahia, an Iraqi soldier conscripted into working as the fiday, or body double, for Uday Hussein, Saddam Hussein’s eldest son. In his four years as Uday’s decoy and double, Latif witnessed warfare, political repression, and family politics from within the walls of Saddam’s sumptuous palace. He also had a front-row seat to Uday’s voracious appetite for coerced sex, gore, and luxury.

With a story like that, a film brimming with pulpy violence, human drama, scenery-chomping acting, and jet-black humor (with a dash of Arab politics and war) is pretty much guaranteed, right? Not quite.

The movie does pack quite the wallop with its gritty content and some truly accomplished performances. At its best moments, The Devil’s Double is a brutal, dizzying head-rush of a movie—a lusciously shot drama that stimulates and challenges the senses with its torrent of excess and unthinkable cruelty.

The debauched, nihilistic son of Saddam is portray as the spoiled “dark prince” of Iraq, riding high on a life in which he can party, butcher, and rape children with impunity. The movie sidesteps most of the political scenery (Shiite rebellion, Saddam’s prison state, the consequences of the Gulf War), focusing largely on Uday’s outrageous mafioso-like persona. “I love cunt more than I love God!” he screams as he abducts a trembling 14-year-old schoolgirl from the noisy streets of Baghdad in broad daylight.

The much–hyped dual performance of English actor Dominic Cooper (Breakfast on Pluto, An Education, and…well…Mamma Mia!), who plays both Uday and Latif, superbly channels Uday’s demented, frightening sadism, while simultaneously crafting a deft portrayal of the appalled Latif. As Uday casually satisfies his bloodlust, snorts yacht-loads of coke, and cracks bad jokes (like insisting that Latif must undergo minimal “cock reduction” to be a more persuasive double), Cooper’s ability to turn icy charisma to pure psychosis is sharp and thoroughly convincing.

And Raad Rawi, who plays Ba’ath Party adviser Munem, delivers an exquisite and oddly charming portrait of a stoic confidant maintaining absolute loyalty to the regime, even when he becomes noticeably repulsed by Uday’s behavior.

But The Devil’s Double’s biggest problems stem from its inability to decide whether it wants to be a morality play, an exploitation flick, Scarface in Mesopotamia, or a Greek tragedy. And the issue of the movie taking liberties with the truth is no big shock, seeing as how movies sold with the “based on a true story” tag generally mug the very concept of historical accuracy (The Hurricane, Frost/Nixon, American Gangster, and the rest of them). The trouble is that the facts of Latif’s experiences and Uday’s life, as well as the horrors and power games of Iraq’s republic of fear, are far juicier than anything the screenwriter managed to dream up. For instance, the movie doesn’t even bother touching Uday’s infamous tortures of the Iraqi Olympic team, his involvement with state propaganda, his massive smuggling enterprise, or his dramatic last stand with US special forces in 2003 (the film ends abruptly in 1996). The same goes for Latif’s run-in with the Kurdish resistance or his alleged encounters with unfriendly CIA agents. Instead, the audience is fed too much shallow melodrama, such as an embellished, unnecessary subplot about Latif and Uday’s mutual lover, Sarrab, which is only made worse by the strained and flat performance of actress Ludivine Sagnier.

As a result, the momentum and the novel shock value get sucked dry, as the filmmakers struggle to find a satisfying conclusion. It’s almost painful to watch the movie run out of steam in the last 15 minutes, nearly tanking all the tension and drama that the first hour-and-a-half had so colorfully built.

Overall, The Devil’s Double is still worth seeing if you’re looking for a visceral sketch of a real-life monster and his reluctant companion. The movie seems content with being defined by unsettlingly rowdy moments, like a scene in which an intoxicated Uday, with a golden pistol in his hand, forces everyone on a packed dance floor to strip naked on his birthday (with Frankie Goes to Hollywood’s “Relax” blaring ironically in the background). In the end, the movie’s most memorable parts amount to little more than riveting style, without the much-desired impact of substance or honest emotion.

The film gets a wider release this Friday. Here’s the theatrical trailer (vibrantly set to Depeche Mode’s “Personal Jesus“):