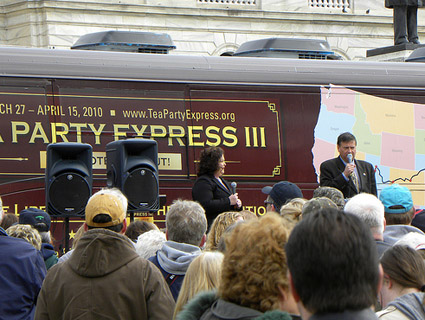 Is the tea party happy that Standard and Poor’s, the credit rating agency, downgraded the United States’ credit rating for the first time ever?

You’d think that was the case if you were in the crowd at a tea party rally in Fond du Lac, Wisconsin, on Sunday morning. The Tea Party Express rolled into that northeastern city as part of its tour to bolster the six GOP state senators facing recall elections on Tuesday. But the most shocking moment of the event wasn’t the vitriol spouted by tea party leaders, which has dominated news of the tour stops in recent days. Instead it was the cheers that erupted when one of the Tea Party Express’ speakers described the recent downgrade as the tea party’s fault.

Here’s what happened: Midway through the Fond du Lac event, Florida talk show host Andrea Shea King took the stage. She told the audience that commentators were describing the downgrade of US debt to AA+ from AAA as the “tea party downgrade,” laying the blame squarely on Congress’ right-wing faction and its supporters. But rather than boo those who claim the tea party caused the downgrade, the 200 or so Wisconsinites in attendance cheered, sounding almost proud to be blamed for the downgrade.

And here’s the transcript:

SHEA KING: This week—I wrote it down—they are blaming the credit downgrade on the tea party movement.

SHEA KING: They are calling it “the tea party downgrade.” They are objectivizing [sic] us.

There you have it. At least here in Wisconsin, tea partiers are pleased that the full faith and credit of America took a knock, and are more than happy to take full credit for it.