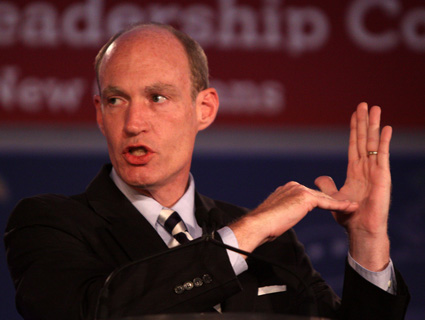 When Rep. Thaddeus McCotter (R-Mich.) announced that he would run for president at the beginning of July, Republican voters replied with a collective “Who?”—if they even caught the news at all. A month later, if his appearance Friday morning at the Des Moines Register’s Iowa State Fair soapbox was any indication, McCotter’s only just begun to get his name out. “I’d never heard about him until the last week or so,” said Martha Meyer, an undecided voter from Pleasant Hill, Iowa. (The notable exception here is in Michigan, where McCotter recently polled ahead of former Minnesota governor Tim Pawlenty, for whom Saturday’s Ames Straw Poll could be a make-or-break moment.)

McCotter, a mild-mannered Midwesterner with engaging dry wit, hails from Livonia in metropolitan Detroit. He was first elected to Congress in 2002, after stints as a lawyer, county commissioner, and state senator. He is notable for his quirkiness, playing in a band called the Second Amendments and quoting Led Zeppelin from the House floor. “You need to see Thad as an artist, not a politician,” an associate explained to the Detroit News.

Part Tea Party conservative, part nonconformist, the 45-year-old McCotter distinguishes himself from the pack with his unapologetic support for blue-collar workers. He’s among a handful of Republican representatives who voted for the auto industry bailout, a minimum wage raise, and collective bargaining agreements. On the soapbox, he said that Wall Street banks should be “restructured and recapitalized without taxpayer money” and vowed to deregulate a “highly bureaucratic Washington,” but acknowledged that Americans “believe in a social safety net to help those who cannot help themselves, as Lincoln taught us.” (He still opposes Obamacare.)

In Congress, McCotter’s intellectual reputation earned him chairmanship of the Republican Policy Committee in 2006. But last year, he irked colleagues by proposing that the committee be disolved so its $360,000 budget could go toward reducing the federal deficit. Then-GOP whip Eric Cantor intervened and replaced McCotter with Georgia Rep. Tom Price.

By all indications, McCotter faces impossibly long odds to secure his party’s nomination for president. While he clearly recognizes where he stands—he harbored no resentment for his exclusion from Thursday’s debate in Iowa, conceding that “you generate your own traction”—he still says that his primary goal is “to win” the election. (Otherwise, he said, why bother?) During his speech, McCotter, who is balding, joked that “the top two qualifications for a president are good hair and makeup.”

Des Moines resident Rick Ryan agreed with that sentiment. He said that the Republican candidates had all failed to impress him, but this was his first real introduction to McCotter. “I like him. He’s not about telling people what they want to hear, he’s telling people what they need to hear.” Still, Ryan wasn’t ready to endorse the Michigan representative. “There’s really no cut-and-dried winner out there,” he said.

Some pundits predict that McCotter will soon give up his presidential bid to defend his House seat, which the Democratic National Committee has targeted as “vulnerable” in 2012. Others figure he’s just running to hawk his new book, Seize Freedom! (a charge commonly brought against Newt Gingrich). But the congressman spent $18,000 to secure a tent at the Ames Straw Poll, and at the fair he hinted that he would at least stick it out through the New Hampshire primary in February.

“We just started the campaign about a month ago, and I have too much respect for the people of Iowa to think that you just bounce in and expect to have a wonderful result,” McCotter said. “So we treat it as an introduction rather than a test of organization.”