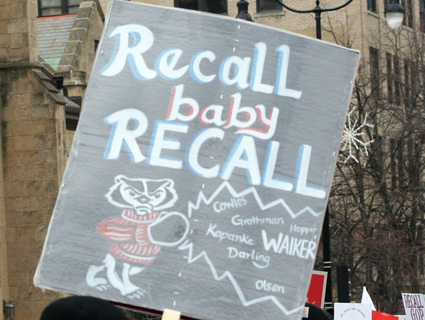 Democratic state Sens. Bob Wirch and Jim Holperin defeated their Republican challengers in the final two recall elections of what has been the most heated, politically divisive summer in recent history in Wisconsin. Wirch defeated corporate attorney Jonathan Steitz 58 percent to 42 percent. Holperin, in the second recall of his career, led tea party darling Kim Simac 55 percent to 45 percent with 95 percent of precincts reporting. The Associated Press called the race for the veteran Democrat.

Wirch and Holperin’s victories mean Democrats gained two Senate seats out of a total nine recall elections this summer. (Six of the recalls targeted Republicans, while three targeted Democrats.) Those two seats aren’t enough to give Democrats the outright majority in the state Senate, but the gains create the possibility that a moderate Republican could act as a swing vote and potentially tip the Senate majority away from the Republican leadership and Gov. Scott Walker. Both parties declared themselves the winner of the recalls, with Democrats touting their two new seats and Republicans bragging about how they defended their Senate majority, which now stands at 17-16.

Mike Tate, the chair of the Democratic Party of Wisconsin, said Tuesday’s wins showed that Democrats were the overall winners in the recalls. “Democrats won more races, recalled two Republican senators, protected every Democratic incumbent, shifted the balance of power in the State Senate away from conservatives, and forced Walker and the GOP to pay public lip service to moderation and bipartisanship for the first time since they took power in January,” he said in a statement. Meanwhile, Wisconsin GOP chair Brad Courtney said in a statement, “Wisconsin now emerges from this recall election season with a united Republican majority who has beaten off an attack from national unions and special interests and emerged steadfastly committed to carrying forward a bold job creation agenda.”

Wisconsin’s recalls were nothing if not historic. For starters, there had only been 20 state legislative recalls in the US since 1905; the Badger State saw nearly half that many this summer alone. The turnout was staggering for late-summer elections, exceeding many strategists’ predictions and, in one senate district, even outpacing the turnout for the 2010 governor’s race.

Then there was the sheer amount of money spent. Mike McCabe, director of the Wisconsin Democracy Campaign, a nonpartisan group that tracks money in politics, projected that total spending on all the recalls had reached $37 million. By contrast, a mere $3.75 million was spent on the entire slate of legislative races in 2010. As McCabe told me earlier this month, recall spending “is so out of whack from everything we’ve ever seen.”

What’s next for Wisconsin’s progressives, who still hope to build a movement around the winter labor uprising in Madison and the summer recalls, remains to be seen. Despite Walker’s dismal approval ratings, half of the Wisconsinites polled in a recent Public Policy Polling survey said they did not support recalling Walker. Part of that reluctance can be blamed on the nasty tenor of this summer’s race, with wave after wave of attack ads blanketing the airwaves, especially in last Tuesday’s six GOP recalls. Wisconsinites, I often heard as I traveled around the state last week, are just plain burned out on politics.

But don’t think that will prevent Democrats and progressives from taking their chances with a Walker recall effort. Scot Ross, the executive director of the progressive communications group One Wisconsin, told me last week that he saw Tuesday’s final two recall elections as only the third quarter of the political battle in Wisconsin. The fourth quarter, he said, is “when we’re going to recall Gov. Walker next year and restore decency, fairness, and common sense to this state.”