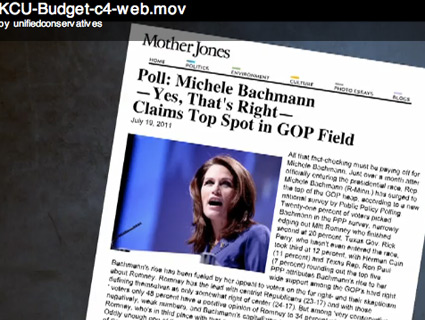 A still of the anti-Perry TV ad that references a Mother Jones blog post.Screenshot: Asawin Suebsaeng

Keep Conservatives United, a super PAC supporting GOP Rep. Michele Bachmann’s presidential bid, has produced an anti-Rick Perry attack ad, set to air in South Carolina after the Labor Day weekend. And it uses a Mother Jones article to make its case that Bachmann is the better—and more to the right—candidate.

The ad, which will begin airing September 7 on CNBC, Fox News, and CNN, pillories Perry for pitching himself as a fiscal conservative and friend of the tea party despite going on spending binges during his decade as Texas governor. Considering Perry’s entry into the 2012 race has threatened Bachmann’s share of the tea party vote, the gist and tone of the ad aren’t unexpected. What is a bit surprising is that this latest Bachmann super PAC ad deploys a Mother Jones blog post to sell Bachmann. Watch the TV spot below; the MoJo promo appears at the 30-second mark, as the voice-over proclaims that “there is an honest conservative, and she’s not Rick Perry”:

This isn’t even the first time Bachmann’s super PAC has cited MoJo. But the ad makes it seem as if we were endorsing her as the “honest” one.

Leaving aside the obvious, farcical tangle of questions this presents (like, “Why didn’t they just use a National Review post?”), the ad glosses over all the, well, you know… content.

The referenced blog post was written by our DC reporter Andy Kroll on July 19, and the first paragraph starts with a sarcastic jab at how “All that fact-checking must be paying off for Michele Bachmann”—a reference to her penchant for saying things that are patently not true. (This is clearly visible in the ad.)

No doubt, Keep Conservatives United will keep churning out the pro-Bachmann ads. So here are a few other Bachmann-related MoJo heds that we suggest for the super PAC’s next spot:

“Michele Bachmann Is Not a Doctor“

“Does Michele Bachmann Think the Apocalypse is Imminent?“

This KCU TV spot might be the first Bachmann ad Mother Jones truly endorses. In today’s economy, we’ll take all the free advertising we can get.