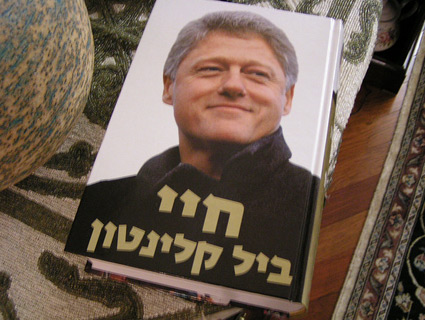 Texas Governor Rick Perry attracted plenty of criticism for his statements this week regarding President Obama’s stance on the Palestinian Authority’s push for UN statehood recognition. Among the critics was Bill Clinton, who accused the Republican presidential hopeful on Thursday of cynically practicing “good politics” by siding with “militant subgroups in Israel” and pandering to pro-Israel Jewish voters. The former president had this to say on MSNBC’s Morning Joe:

There’s an enormous reservoir of support for Israel in the Christian evangelical community, and a lot of them believe — as some of the more militant subgroups do—that God meant for all Judea and Samaria [the West Bank] to be in the hands of Israel…I’m sure there are hundreds of thousands of people that have never missed church on Sunday in Texas who believe it.

Clinton also lambasted Perry and Republicans for caving in to the Israeli leadership, allowing them to “do whatever [they] want” and to “keep the West Bank.”

However accurate an assessment that may be, there is, unfortunately, a hypocrisy to Clinton’s critique that was left unacknowledged. During his 1992 presidential campaign, the man from Hope wasn’t shy about playing the same kind of “good politics” when it came to locking down the “pro-Israel” vote. Clinton outflanked George H.W. Bush on the right by vehemently opposing Bush’s plan to have settlement freezes as a condition for $10 billion in loan guarantees to resettle Soviet Jewry. Oh, and he also declared to an audience of New York Jewish leaders in March 1992 that Bush was “ever so subtly” undoing “the taboo against overt anti-Semitism.”

In other words, Clinton slamming Perry on this issue would be akin to Clinton weighing in on the Troy Davis debacle and forgetting about the execution of Ricky Ray Rector he oversaw as governor of Arkansas (which is actually something Clinton had the gall to do on Thursday, too).

Perry’s condemnation of Obama’s foreign policy and Clinton’s rebuttal both show that exercising these “good politics” on Israel is one of the few things both sides of the aisle can still agree on.