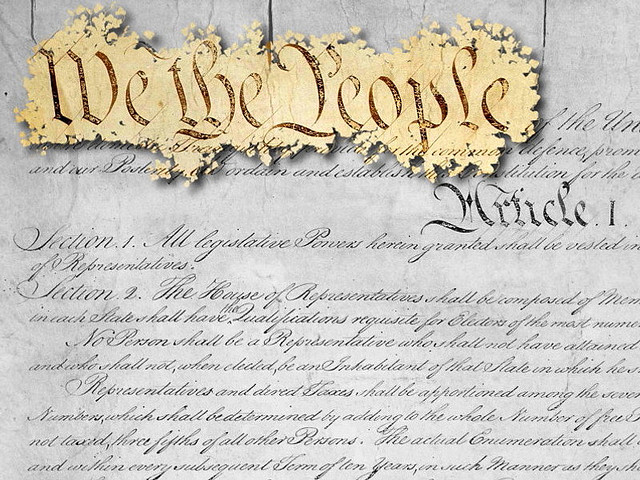 Back in May, tea party groups began urging their members to “adopt a school” and pressure it to teach students about the Constitution—tea party-style. They set up webinars and provided helpful form letters addressed to school superintendents and principals reminding them of the congressional mandate that requires any school receiving federal money to teach students about the Constitution during the week of September 17. And they offered up kits complete with teaching materials from the National Center for Constitutional Studies, a nonprofit founded by Glenn Beck’s favorite “historian,” the late W. Cleon Skousen, author of The 5,000 Year Leap.

When word got out that the tea party wanted to give America’s impressionable kids a civics leson, liberal lawyers fulminated. “To qualify to teach America’s children about the Constitution you need to do more than dress up like James Madison,” snipped the Constitutional Accountability Center’s Doug Kendall.

After thinking about it, though, I wondered if the tea partiers might be on to something. After all, it’s really hard to argue against teaching kids about the Constitution. So I decided to take up the tea party challenge. Or at least, I ordered the school kit.

The kit arrived a few days later, replete with a pocket Constitution. The teachers’ guide included fill-in-the-blank worksheets that encouraged memorizing such things as the preamble, the names of the original signers of the document, or the main topic of each article of the Constitution. The guide only really deals at any length with the first 10 amendments, so it largely ignores the entire 20th century. It does, however, include the favorite Skousen-follower detail about Benjamin Franklin’s desire to start every day of the Constitutional Convention with a prayer (a proposal that failed, incidentally). Mostly, the guide dealt in the minutiae of historical details: names, dates, places. A quiz asked multiple-choice questions like, “Who served as the chairman of the Committee of the Whole at the Constitutional Convention?” (Answer: Nathaniel Gorham.)

Tea party leaders have urged activists to spice these offerings up by coming to school dressed up as say, James Madison. Overall, though, the tea party school kit wasn’t quite as horrible as critics had warned, at least from a historical standpoint. The biggest problem with the suggested curriculum is that it is, well, boring. Really boring. Weighted down with quizzes about what the document says, it largely avoids talking about what it all means, or how it applies in the present day. Which is unfortunate, because the Constitution and its case law are anything but boring. The story of the Constitution is an epic drama, which includes fights over justice and equality, right and wrong. But the tea party version omits that part—along with any indication that the Constitution might have any real-life relevance after 1787.

So while I liked the idea of bringing the Constitution to the classroom, I really didn’t think I could sell a DC public school on a lecture about Roger Sherman and the Connecticut Plan, even from someone in a tricorn hat. So instead, my local school, Ross Elementary, got Walter Dellinger, a former acting solicitor general of the United States, Clinton-era White House counsel, and assistant attorney general. Supreme Court Justice Elena Kagan used to work for him. One of the nation’s leading Supreme Court litigators and a visiting professor at Harvard Law School, Dellinger knows a little something about the Constitution. He came to Ross courtesy of the American Constitution Society, a liberal-leaning legal group that’s been holding Constitution Day classes since long before the tea party even existed.

Rather than lead a group of third- and fourth-graders in rote memorization, Dellinger told the story of 13-year-old Mary Beth Tinker and her 15-year-old brother, John. They were the Iowa kids who were suspended from school for wearing black armbands to protest the Vietnam War. They fought their school district all the way to the Supreme Court and won a landmark student free speech case in 1969 in which the court ruled, “It can hardly be argued that either students or teachers shed their constitutional rights to freedom of speech or expression at the schoolhouse gate.” Dellinger asked the kids probing questions, making them think about what free speech meant in that context: “Can a black arm band be speech? Can an arm band talk?” he asked.

Dellinger explained the Constitution’s protection of freedom of religion by sharing a personal story of his own experience with religious discrimination growing up in the South. In fifth grade, Dellinger explained, he was the sole Catholic kid in a class full of Protestants. Every Thursday, he and the class’ one Jewish kid had to leave the room for an hour to shelve books in the library at 10 a.m. when the Protestant Bible teacher arrived. Mimicking the principal on the loudspeaker, Dellinger described how the school singled him out and embarrassed him in front of his classmates because he was different, and how he would get sick to his stomach every Thursday when the time came for him to leave the class. He noted that such practices were later ended after the Supreme Court found them unconstitutional.

The kids only squirmed a little through all of this, but they really lit up when Dellinger gave a quick run down of some of the early amendments and briefly mentioned the Second Amendment right to bear arms. He tried to gloss over that one, but the kids were having none of it. They invoked their free-speech rights and asked things like, “Is it against the law to keep an auto or sub-auto?” or “Can you only keep a weapon under a bed or do you have to keep it in the closet?”

“Just because you can have a gun doesn’t mean you can have a tank,” he explained by way of describing the limits of constitutional freedoms, an explanation that had the kids in fits.

“My dad has three swords under his bed,” one student volunteered. “One sword is all I can use at one time,” Dellinger responded with a laugh.

“What about smoke bombs? Can you have those?” a kid asked. Consulting a library book on the Bill of Rights, Dellinger said, “Nope, not in here.”

The line of inquiry from the students had some of the school staff cringing. But the lively discussion made one thing clear: The kids were interested, and at least on one level understood, that the Constitution has some relevance to every day life. It’s not just a piece of paper frozen in amber, the way the Skousen/tea party crowd would have it. And while Dellinger might not have been exactly who the tea party groups had envisioned teaching the Constitution when they set out to enlighten the nation’s youth, his liberal commitment to the First Amendment let a class full of kids learn about the Second. Tea partiers should be pleased.