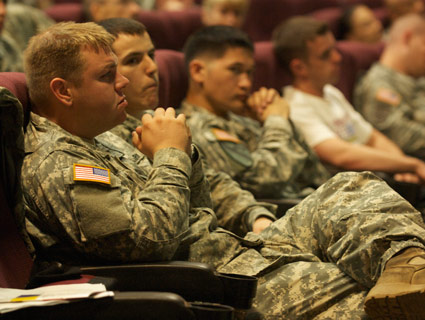 Last winter, the Department of Veterans Affairs tasked its newly hired blogger, a cantankerous Iraq vet named Alex Horton, with investigating the website GIBill.com, one of many official-looking links that come up when you Google terms like “GI Bill schools.” With names like ArmedForcesEDU.com and UseYourGIBill.us, these sites purport to inform military veterans how to best use their education benefits. In reality, Horton found, they’re run by marketing firms hired by for-profit colleges to extol the virtues of high-priced online or evening courses. He concluded that GIBill.com “serves little purpose other than to funnel student veterans and convince them their options for education are limited to their advertisers.”

The 65-year-old GI Bill is widely credited with transforming post-World War II America by subsidizing vets’ college education and fueling the expansion of the middle class. Yet recently, the program has also become a cash cow for for-profit schools like Capella, DeVry, ITT Tech, Kaplan, and the University of Phoenix, eager to capitalize on vets coming back from Iraq and Afghanistan.

As a beefier post-9/11 GI Bill has kicked in, a surge of service members has left the ranks armed with benefits that will cover the full cost of attending public college. In 2009, the for-profits took in almost as much military money as public colleges, even though they enrolled about one-third the number of vets. Spending on military education benefits has shot up to $10 billion; for-profit schools’ share of that money has gone up 600 percent, as revealed in a recent PBS Frontline exposé. For example, at Kaplan—owned by the Washington Post Co.—military revenues grew to an estimated $48.9 million last year, up from $2.6 million in 2006.

The result has been a bonanza for schools’ executives and shareholders. “We didn’t foresee that the for-profit sector, eager to please Wall Street investors, would go after this new funding aggressively, often in ways that are not in the best interests of veterans and service members,” stated Sen. Tom Harkin (D-Iowa) after leading an investigation into 30 major for-profits earlier this year. Or as one University of Phoenix alum put it on RipoffReport.com, the school “treats military students like cash piñatas.”

Online ads are just the opening salvo in the for-profit schools’ recruitment campaign. The 400,000-student University of Phoenix runs a “military division” that employs 600 vets, operates satellite campuses on military bases worldwide, and publishes an online military newsletter called the Patriot. The American Forces Network has made an exception to its no-commercials policy to air the school’s ads. “We feel putting this information on the air is beneficial to the community,” a program director at the network told Stars and Stripes. For-profit schools’ “military enrollment advisers” are also routinely given access to soldiers on bases. An investigation by Bloomberg found that a recruiter visited Camp Lejeune’s Wounded Warrior ward, hoping to enroll injured Marines.

“I felt that I have been misled, deceived, or even outright lied to,” one vet testified

For-profit colleges bill themselves as flexible job-training programs, but their costs can outweigh the benefits. At 8 of the 10 for-profits that take in the most GI Bill cash, more than half of students drop out within a year of matriculation. Many students find that prospective employers and graduate schools won’t take their coursework seriously since most for-profits lack accreditation from legitimate academic bodies. “I researched the accreditation and it seemed legit. I had no idea…none of my schooling would transfer,” an Army vet and University of Phoenix alum from St. Petersburg, Florida, wrote on the VA’s GI Bill Facebook page. “A lot of places see the guaranteed GI Bill as cash in hand and it’s a shame they take advantage of us.”

Some for-profits have cleaned out students’ military benefits while also signing them up for thousands of dollars in loans without their knowledge. A vet who enrolled at the largely online Ashford University after being told the GI Bill would cover his tuition ended up owing the school $11,000. “I felt that I have been misled, deceived, or even outright lied to,” he told Senate investigators.

At some schools, more than 60 percent of military students ultimately default on their loans. A 2010 VA audit found serious bookkeeping errors at nearly every school it reviewed: An Arizona school didn’t give a veteran promised tuition discounts and pocketed $20,000; a New Jersey school collected nearly $5,000 in tuition from a student after he’d been recalled to active duty.

How did this much-loved program become corporate welfare? Congress expanded GI Bill benefits for service members and their spouses just as investors were looking for fast-growing stocks—like educational for-profits—to replace the once-hot real estate market. Tuition assistance is now paid directly to institutions, not soldiers, making it easier for schools to convince vets to sign over their benefits. GI Bill dollars have also enabled for-profits to boost how much federal financial aid they receive. In order to collect federal Title IV aid—Pell grants, Stafford loans, and Plus loans—the schools must obey the “90/10 rule”: They can’t derive more than 90 percent of their total income from Title IV programs. GI Bill funds don’t count toward that total. So every dollar of military aid enables for-profit schools to collect nine dollars from the Department of Education.

The VA oversees the disbursement of GI Bill money, but its bureaucracy has been swamped by the glut of soldiers-turned-students. It relies heavily on reporting from state agencies, which in turn frequently rely on information cherry-picked by the schools themselves—an approach, the Government Accountability Office notes, that “undermines the independence of the review.” Harkin and a cohort of Democratic senators have proposed stricter guidelines for the for-profits, which spent more than $7 million on lobbying last year. The plan has found few additional supporters in Congress.

In the meantime, Horton and his colleagues on the VA’s outreach team continue their war on misinformation. “We’re not in the business of telling veterans where they can and can’t go to school,” says his boss and fellow Iraq vet Brandon Friedman. “But we can give vets enough knowledge to make a decision.”

Horton encourages service members to do their homework so they get the best value for their benefits. “Take a look at the CEOs and directors of those for-profit schools, Kaplan, DeVry, Ashford. Where’d they go to school? Harvard, Stanford, Oxford,” he says. “Zero are for-profit graduates.”