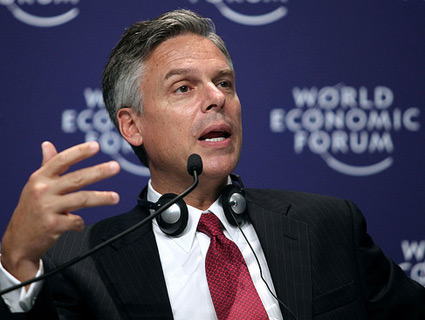 Before Monday night’s CNN/Tea Party Express debate, Jon Huntsman’s campaign staff must have advised him to ditch the remaining scraps of his strict “civility” code and get his pugilism goin’.

Continuing his recent habit of criticizing fellow Republican contenders—including Mitt Romney for his job creation record, or Rick Perry for his feeble grasp on reality—Huntsman spent a significant chunk of his stage time during the debate attacking the other candidates.

The former Utah governor kicked things off by tossing out an awkward shout-out to the rock band Nirvana, mocking Mitt Romney’s book, No Apology: The Case for American Greatness, by saying it sounded like a “Kurt Cobain reference.” Unfortunately for Huntsman, half-hearted grunge-rock humor doesn’t exactly fire up tea party crowds. (In Huntsman’s defense, his joke was only off by one word.)

Later in the evening, Huntsman set his sights on Texas governor Rick Perry, arguing that, “For Rick to say you can’t secure the border is pretty much a treasonous comment.” Though immigration was the topic, this possibly doubled as a tongue-in-cheek reference to Perry’s controversial indictment of Ben Bernanke in mid-August.

Later, Huntsman went back to taking potshots at Romney, this time reminding the Tea Party spectators (who aren’t particularly fond of Romney in the first place) about the former Massachusetts governor’s propensity for flip-flopping: “I think we could spend all night talking about where Mitt has been on the issues, and that would take forever!”

Huntsman, who cannot seem to get out of the low single-digits in the polls, seems to have developed a new strategy for attracting much-needed attention from the electorate: Hurl a lot of criticisms at the screen and see what sticks.

But all Huntsman’s attacks drew either crickets or muffled boos from the Tea Party audience. Will there be big difference in Huntsman’s numbers come morning? Don’t count on it.