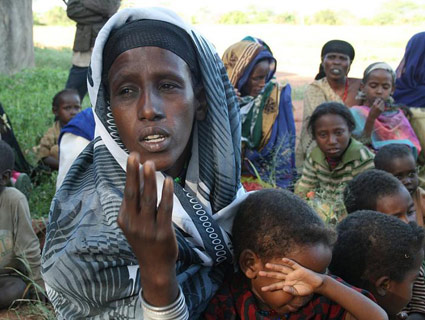 The United Nations has called the ongoing drought and famine in Somalia the “worst humanitarian disaster” in the world. It’s going to get worse in the coming months. Yet a new Pew Research Center study released on Thursday shows that news outlets have barely noticed: “In July and August the food crisis has accounted for just 0.7 percent of the newshole. Year-to-date the crisis registers at just 0.2 percent.”

Aid workers say the current famine, which has affected Somalia, Kenya, Ethiopia, and Djibouti, “is worse” than the one that hit Somalia in 1992—making it perhaps the most serious food crisis since the famine that devastated Ethiopia in 1985.

The statistics are shocking: In Somalia, at least 29,000 children died of starvation in 90 days. Some 2 million children are malnourished, and another 500,000 children are at great risk of starving to death. Some 12 million people in the region need emergency assistance. The crisis has been exacerbated by the al-Shabaab Islamist insurgent group, which has played a hand in causing the famine by forcing out aid groups and preventing starving Somalis from fleeing the country.

As you read this, you might be thinking, “Huh? There’s a famine in Somalia right now?” If you haven’t heard about the crisis before, it’s because US news coverage has been focusing on other topics—a tabloid scandal, Congress’ budget deficit battle, the economy, Middle East revolutions, and, most recently, Hurricane Irene. Some of these are important, attention-worthy stories, but they’ve drowned out almost any coverage of the famine. That matters: Relief organizations say their fundraising efforts have stalled because the media isn’t talking about the famine. The United Nations recently announced that it needs $1.1 billion to adequately respond to the crisis.

Even a little media coverage can have a big impact on relief fundraising. When ABC News reported from famine refugee camps in Somalia, Doctors Without Borders received $100,000 in donations just hours after the coverage aired. 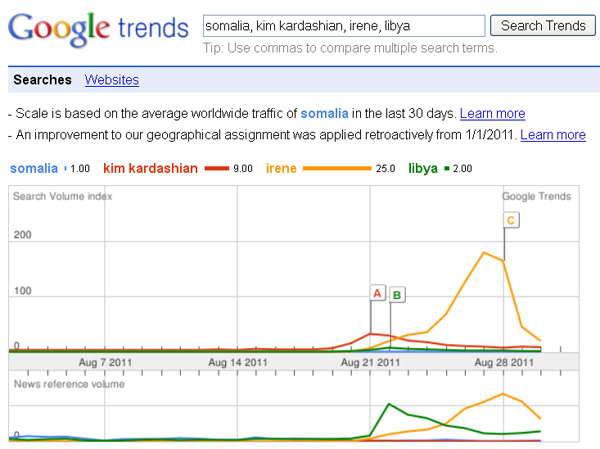 Maybe Kim should mention the famine in Africa. If that’s what it takes to get the public to start paying attention and donating to relief organizations, so be it.