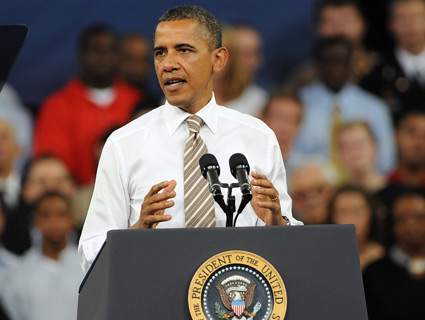 Ahead of President Barack Obama’s big speech on Monday morning outlining his “growth and deficit reduction plan,” the White House released a fact sheet detailing his proposal to cut an additional $3 trillion from the deficit in the next 10 years. It noted that the plan includes Obama’s American Jobs Act and would lead to a total of $4.4 trillion in deficit reduction. More than $300 billion would be squeezed out of Medicare and Medicaid, with about two-thirds of that resulting from reducing “overpayments” in Medicare. The plan does not include any cuts in benefits for Medicare recipients or entail raising the eligibility age for Medicare. (The plan doesn’t touch Social Security.) Other savings would come from agriculture subsidies and federal employee benefit programs. The plan counts $1.1 trillion in savings from the drawdown of troops in Afghanistan and Iraq.

It seems as if the plan was designed to piss off Republicans. It doesn’t have the level of entitlement cuts that GOPers crave. They hate the idea of counting de-escalation in Afghanistan and Iraq as a cost-saver. Most of all, they despise the plan’s revenue-raising proposals: allowing the Bush tax cuts for the rich to expire; limiting deductions for those making more than $250,000 a year; and closing loopholes and killing special interest tax breaks. All of these tax provisions would add up to $1.5 trillion in deficit reduction. So this plan—Obama’s submission to the so-called supercommittee—is an invitation to a smack-down brawl.

Which brings me to the one sentence in the White House fact sheet that is in boldface: “The President will veto any bill that takes one dime from the Medicare benefits seniors rely on without asking the wealthiest Americans and biggest corporations to pay their fair share.”

Before GOPers even saw the details of Obama’s plan, they were blasting it (predictably) as class warfare. Is Obama ready to pound back?

This is known as a message. Obama is saying that he won’t take anything away from Medicare beneficiaries—and he’ll continue to point out that the Republicans are on record as supporting ending the Medicare guarantee for seniors. But there is, it seems, wiggle room here. If the GOPers relent on revenues and okay a tax hike on the wealthiest Americans and biggest corporations, might Obama consider trimming benefits for some seniors? With this statement, Obama looks as if he’s both prepping to stand firm—while still being open to a grand bargain that includes more extensive entitlement cuts.

Before GOPers even saw the details of Obama’s plan, they were blasting it (predictably) as class warfare. Is Obama ready to pound back? In his Rose Garden speech, the president was fiery and feisty. He noted that he rejected the idea that asking a hedge fund manager to pay the same tax rate as a teacher or plumber is class warfare. He pointed out that the Bush upper-income tax cuts were designed to be temporary. He called out House Speaker John Boehner (R-Ohio) for saying last week that no one should adopt a my-way-or-the-highway stance and then, in the same speech, proclaiming that any talk of increasing taxes ought to be off the table. Obama repeated the veto threat from that fact sheet. “We will not have a one-sided deal that hurts the folks that are most vulnerable,” he said.

Rather than produce a proposal that could be an ending point for bipartisan negotiations, the president has unveiled a strong opening position. This is somewhat in contrast to how he approached the negotiations over the budget earlier in the year and the more recent tar-pit talks concerning the debt ceiling. But striking this tough stand at the outset will only serve him well, if he’s now willing to battle publicly and negotiate fiercely in the weeks ahead. “Public servants,” he said, “weren’t elected to do what’s easy…And that’s what this debate is about.” And for Obama, the challenge ahead is to maintain this well-framed fight even as he seeks a deal.