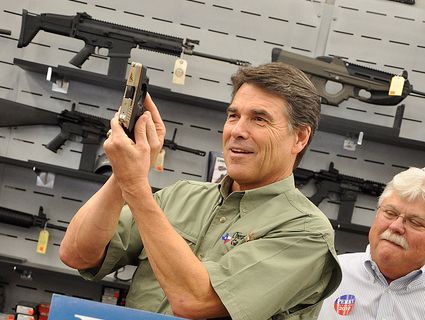 MSNBC’s Michael Isikoff gets a hold of internal communications from Make Us Great Again, a new Super PAC set up by supporters of Texas Governor Rick Perry, and reports that it expects to raise and spend $55 million during the Republican presidential primary:

The new super PAC backing Rick Perry has drawn up plans to spend $55 million as part of an ambitious campaign strategy aimed at blowing away the Texas governor’s rivals in early primary states and securing him the Republican nomination by next spring, according to internal committee documents obtained by NBC News.

The documents underscore the central role that such super PACs — or super political action committees unconstrained by any limits on how much they can collect from wealthy donors and corporations — will play in the 2012 presidential election.

They also show that the strategists behind the new Perry super PAC, led by a longtime Perry confidant and backed with infusions of cash from major Perry donors, are preparing to mount a full service political operation — complete with TV advertising, direct mail and social media outreach.

Super PACs can accept unlimited contributions but most disclose donor information and cannot coordinate in any way with candidates. In the post-Citizens United climate, super PACs have become the hottest new accessory for presidential candidates, and all of the serious GOP contenders have at least one. Make Us Great Again was organized by Mike Toomey, Perry’s former chief of staff, who has remained close with the governor as a lobbyist in Austin and contributed generously to his most recent re-election bid.