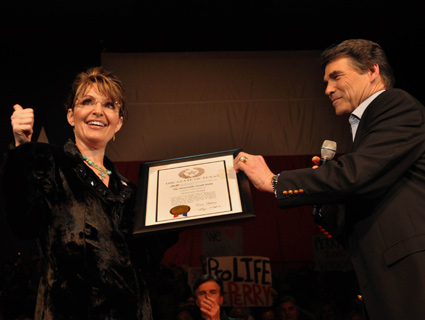 Forget cowboy hats, wide vistas, or the mileage on the typical F-350 ranch truck. The biggest thing in Texas is the state’s outsized sense of identity. Ever since the Battle of the Alamo immortalized Davy Crockett, the Lone Star State and its residents have loomed larger than life in popular mythology. Texas has its own rugged archetype in Hollywood, its own ethnic cuisines, and its own “national” beer and magazine. No state is better known as a cultural standout.

In Austin, where state identity is the manna of politics, governors have long upheld the tradition of naming worthy outsiders “honorary Texans”—a title that Crockett, a Tennessee native who died fighting for Texas, would have deserved. Foreign dignitaries, actors, and musicians have been the most popular picks, though some governors have gotten more creative. (Check out the stories behind 10 of the more unconventional picks.) Ann Richards named a breast cancer victim and a women’s basketball star. George W. Bush named a Catholic nun and an insurance lobbyist. And Rick Perry named Glenn Beck, Sean Hannity, Rush Limbaugh, and Sarah Palin.

Though politics always seems to play a role in Texan identity, Perry appears unique among governors in honoring so many ideologues. A detailed search of newspaper archives reveals only a handful of past honorary Texans who could be considered partisans, the closest being William Hague, the leader of Great Britain’s Conservative Party, who was named by Bush. But unlike the former president, who also honored Bob Dylan and a Democratic congressman, Perry hasn’t balanced his picks with people who are obviously from the other side of the aisle.

“Rick Perry believes being a Texan means being a right-wing blowhard,” notes the Houston Press. A lot of non-Texans now agree. Under Perry, the state’s identity has become smaller and less inclusive. And for a place where expansiveness is a point of pride, that’s about as close as you can get to an identity crisis.

Here’s a list of honorary Texans named by Perry and seven former governors, as culled from news clips:

DOLPH BRISCOE, Democrat (1973-79)
Christi Wolfington, a girl whose Texan father was unhappy that she was not born in Texas
Nicolae Ceausescu, Romanian president