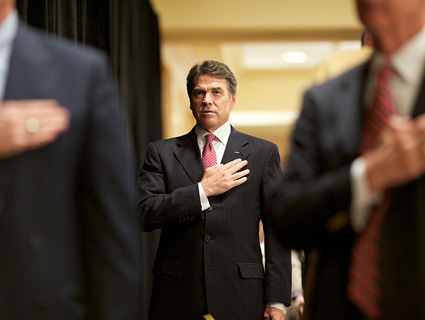 There were likely few Orthodox Jews around for Rick Perry to hug when he was growing up in West Texas, but on Tuesday in Manhattan, the governor managed his warm embraces with ease. Perry treated a coterie of Jewish community leaders from across the five boroughs to a closed-door chat before giving them the opportunity to stand behind him during a press conference at the W Hotel in Union Square. Men with robust beards and yarmulkes accompanied Perry at the podium, where he outlined a “pro-Israel” vision for American foreign policy and answered questions from reporters.

In the past, Perry’s friends and advisers have argued that defending Israel is not just sound geopolitical strategy—it’s also a religious imperative for Christian politicians. On Tuesday, the Texas governor and GOP presidential front-runner vigorously affirmed both views. When Mother Jones asked if he believes America’s continued support for Israel is a theological priority, Perry answered: “As a Christian, I have a clear directive to support Israel. So from my perspective, it’s pretty easy. Both as an American, and as a Christian, I am going to stand with Israel.”

Perry’s position mirrors that of Pastor John Hagee, the founder of Christians United for Israel, who exhorted attendees at Perry’s massive evangelical prayer rally last month to defend the Holy Land as a matter of sacred duty. And Barack Obama, Perry argued, is not fulfilling this duty. In prepared remarks, Perry accused the administration of “isolating and undermining Israel,” adopting a “policy of appeasement toward Palestinians,” and casting its lot with “the Arab street, at the expense of our national security interests.”

“Neither adversaries nor allies know where America stands,” Perry said. “Our muddle of a foreign policy has created greater uncertainty in the midst of this Arab Spring.” Perry seemed to scoff a bit as he enunciated the term “Arab Spring,” and moments after chastising the administration for its acquiescence to “the Arab street,” he declared that Obama had been insufficiently resolute in backing Iranian street protesters two years ago when internal unrest shook the country. Perry also weighed in on the Palestinian push for a UN vote on statehood. “Apologists at the [United Nations],” he said, “are exploiting the unrest in the Middle East” to advance Palestinian interests. He called on authorities to shut down the PLO’s offices in Washington if the vote goes forward. (The Obama administration has vowed to veto any measure recognizing a Palestinian state.)

Perry even asked the media to reassure jaded Israeli citizens on his behalf. “The American people are for Israel; we may have an administration that has a different view,” he said. “So I hope you will tell the people of Israel that help is on the way!” Cheers erupted.

Joining the governor at the press conference was newly elected Rep. Bob Turner of Queens, who began his remarks by relaying a message that voters in his district supposedly sent to Washington by electing a Republican for the first time since 1922. “This administration has been vacillating, and at times even hostile to Israel,” Turner said. “And it is not accepted. And it is not acceptable. And there continues to be a very high political price to pay.”

Mother Jones asked Turner, a Christian, what he thought about Gov. Perry’s stated religious commitment to Israel. The rookie congressman seemed flustered: “Um, I could start on a whole theological discourse on natural law and the fundamental principles of Judeo-Christian belief,” Turner said, “and our differences with some branches of Islam on these very issues. But that’s not the issue. As far as I’m concerned, this is moral and political.” Does Turner share Perry’s view that for Christians, there is a “clear directive” to support Israel? “Perhaps there is an underlying thread there for as I [sic] interpret morality and what is right and proper.”

Danny Danon, the deputy speaker of the Israeli Knesset, seems to act as Perry’s emissary of sorts, passing information between the governor and parliamentarians back home. “Whoever wants reaching a hand to support Israel, I will work with him,” Danon told Mother Jones. “I have a long friendship with Christian friends I work with to support Israel.” One of these “friends” is Glenn Beck, with whom Danon organized a controversial prayer rally in Jerusalem last month, drawing thousands of American evangelicals to the volatile heart of the Holy Land.

After the press conference, Danon chatted with famed Republican strategist Roger Stone, who showed up on his own accord—though he now works for Donald Trump in an advisory capacity. “We’re going to get Mr. Trump to Israel in November,” Stone told Danon. “He wants to do it. It’s just a question of some business things he’s got to work around.” Danon graciously suggested arranging a meeting for Trump with top Israeli business leaders. “He would’ve been here today but for being out of the country,” Stone continued. “They offered him $3 million—he’s in Australia. He’s doing two speeches, and he’s being paid $3 million.”

A more demure member of the Israeli Knesset, Nissim Zeev, also wandered through the post-press conference crowd. Zeev said he wasn’t worried about receiving Gov. Perry’s support, despite its zesty evangelical flavor. “He’s not going to make Jewish to be Christian [sic],” Zeev said. “I don’t care what he said. He’s not coming to convert the Jews. We need everybody supporting Israel.”

Also on hand was local favorite Dov Hikind, a conservative Democratic assemblyman from Brooklyn known for his colorful views on homosexuality and other hot-button issues. From the podium, Hikind said supporting Obama is “beyond the pale” for any Jew who cares about Israel. “You can’t be right on everything but wrong on Israel,” Hikind said, with characteristic candor. “We will not support you if you’re wrong on Israel.” Raucous applause ensued. His sentiment was the dominant one: no more ambiguity, no more nuance, no more moral equivalence. America must unflinchingly support its only real democratic ally in the Middle East.

“Obama displayed unprecedented contempt for Israel,” Hikind said later. “It’s not easy for me to cross party lines. It causes me a lot of aggravation.” Hikind declined to go into detail about the private meeting he attended with Perry earlier that morning, saying only that it was a “pleasure.”

Devon Gaffney Cross, a former member of the president’s defense advisory board under George W. Bush and sister to noted anti-Islam activist Frank Gaffney, rounded out the slate of dignitaries. Cross said she was “jumping for joy at the thought of a candidate who was going to speak so forcefully, and so articulately, what Americans feel—which is unswerving support for Israel.”

A young woman, Liat Brody, stood starry-eyed next to Perry as the governor watched Jewish leaders make their remarks. Brody’s father, an associate of principal organizer Joseph Frager, had brought her along. “It was awesome,” she said of Perry’s speech. “I think he’s going to be the best president.”