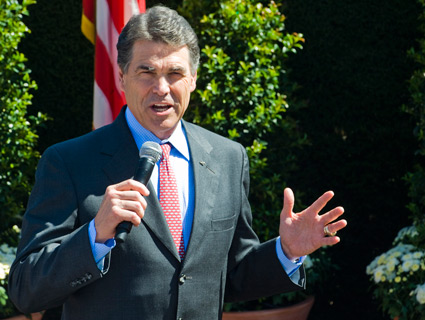 Perry had earned his spot alongside the TXU brass. Months before the announcement, Perry signed a controversial executive order fast-tracking the permitting process for new coal-fired plants, shrinking a process that once took anywhere between one and four years down to a mere six months. And at the same time he was helping usher in new coal plants, Perry was raking in tens of thousands of dollars in donations from TXU. “Perry is very pro-coal, and will bend over backward to do whatever the coal industry asks of him,” says Tom Smith, director of Public Citizen’s Texas office. “He’s the longest ongoing natural disaster in Texas history.”

There is plenty in Rick Perry’s record as Texas governor to worry and anger environmentalists watching him surge to the front of the Republican presidential field. Texas has ranked No. 1 in the nation for carbon dioxide emissions under Perry’s watch. He’s packed the state’s environmental watchdog, the Texas Commission on Environmental Quality, with appointees more interested in dishing out permits to polluters than protecting the environment. And for much of his governorship, Perry has warred with the federal Environmental Protection Agency. “Texas is almost over the top in its hands-off approach to environmental regulation and bias toward industry under Gov. Perry,” says Ilan Levin, an attorney with the Environmental Integrity Project, an national advocacy group that fights for strong enforcement of environmental laws. (A Perry spokesman did not respond to a request for comment.)

Levin points to Perry’s relationship with coal giant TXU as a case study in his willingness to cozy up with dirty industries, especially when it suits him politically.

Power plants that burn coal are a leading source of pollution in the United States. Coal pollution results in 12,000 hospitalizations every year for chest pain, coughing, and breathing trouble, and worsens the effects of asthma and emphysema. Toxic mercury spewed by coal plants poisons rivers and aquatic wildlife while posing serious health risks to children and pregnant women. Given all that, it was no surprise that cities and towns in the shadow of the proposed plants rose up in opposition, in some cases suing to block the new plants. Perry’s executive order was also challenged in court and later deemed unconstitutional by a Travis County judge. In the end, only three of TXU’s new coal plants were built. But Perry stood by the utility throughout 16-month battle.

That loyalty paid off. Between January 2001 and July 2011, the utility, now known as Energy Future Holdings Corporation, gave (PDF) Perry $633,575—more than any other politician. Former TXU chairman Erle Nye, whom Perry appointed to Texas A&M’s Board of Regents in 2003, gave the governor $2,000 on the day he signed the coal-plant executive order, and another $25,000 six months later. TXU’s PAC also gave Perry $5,000 shortly after he signed the order.

The TXU ties go beyond Perry. The governor’s business development director Roberto DeHoyos joined state legislators in 2007 on a deer hunt paid for by a TXU lobbyist, and another lobbyist plied Perry’s legislative director, Ken Armbrister, with free college sports tickets. “TXU has long found it cheaper to invest in politicians than pollution controls, and Rick Perry is the case in point,” Public Citizen’s Tom Smith says.

Perry’s alliance with big polluters isn’t surprising considering his own denial of climate change. In his book Fed Up!, Perry writes that “we have been experiencing a cooling trend” on earth—a thoroughly debunked claim. As for the vast number of experts who say human-caused global warming is real, Perry explained in New Hampshire last month, “I think there are a substantial number of scientists who have manipulated data so that they will have dollars rolling into their projects.”

Perry has also fought a years-long battle with the EPA, the federal government’s environmental watchdog, with Perry constantly savaging what he sees as the agency’s unnecessary meddling in how Texas does business.

In the past three years alone, Texas has sued the EPA a dozen times. Last year, for instance, the state sued the agency when the EPA struck down the state’s “flexible” air quality permitting system for violating the Clean Air Act. And in February 2010, Texas sued the EPA over its plans to begin to regulate greenhouse gas emissions, a move that Perry slammed as “arbitrary and capricious” and “contrary to the Clean Air Act.” Many states, on the other hand, have begun to comply with the EPA’s GHG rules, which attempt to directly grapple with the growing pace of climate change.

Make no mistake: Perry’s environmental record isn’t an aberration. Texas’s record on emissions, air quality, and environmental protection has badly lagged the rest of the country under previous governors. It was George W. Bush who, as Texas governor, allowed industry to police itself when it came to emissions and environmental protection. But even then, critics say Texas’ environmental stewardship is worse than ever with Perry in charge. “He’s not somebody who is a thoughtful conservative who wants to protect things but do so in the least intrusive way,” says Jim Marston, director of the Environmental Defense Fund’s Texas Office. “He simply is for helping his friends make money at the expense of the public or landowners.”