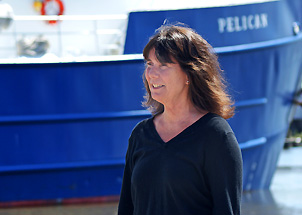 I was pleased to learn this morning that Nancy Rabalais, executive director of the Louisiana Universities Marine Consortium (LUMCON) in Chauvin, Louisiana, is one of eight winners of the 17th annual Heinz Awards. Twice I’ve been drawn into Nancy’s extraordinary orbit to cover stories—once in the aftermath of Hurricanes Katrina and Rita to report on her dead zone work (The Fate of the Ocean), then again last year after ‘Hurricane BP’ to cover her work in the aftermath of a catastrophic oil spill (The BP Cover-Up).

Here’s how I described Nancy after our first meeting in 2005, just before I sailed aboard the LUMCON research vessel, Pelican:

So far her tenure [at LUMCON] has been largely spent digging out of the mud, repairing the wind damage, and casting an eye to the weather. “This used to be a beautiful place,” she says of the striking waterfront facility built on stilts. Now it’s boarded up with storm shutters and surrounded by bulldozers, piles of garbage, stacks of dismantled roofing, stripped palm trees, and muck… Rabalais is weary. It’s late. She still has a two-hour drive ahead of her to Baton Rouge, where she teaches at Louisiana State University—though I suspect she would rather board Pelican for a couple of days and leave her worries behind. Instead, she’s relying on her research associates and graduate students to conduct the scientific cruise she normally looks forward to each month. A Texan by birth and schooling, she has been diving these waters since it was a fun thing to do; nowadays, it requires a certain courage. A week earlier, while diving in zero visibility on a research station 26 miles offshore, Rabalais encountered an alligator at the surface blown out to sea by one or both of the hurricanes. Diving to the bottom, she “felt something bump against my ankle. But I figured a gator wasn’t diving 65 feet deep, so it must have been something else.”

Not quite five years later, I was back on Nancy’s research station listening to her first-person encounter with BP’s oil:

“We dove down in clear water but came up 30 minutes later through oil,” says Nancy Rabalais… A few weeks after the spill, during her summer research surveys 10 miles offshore, Rabalais personally encountered BP’s plumes, which will probably affect her research far into the future. “It was horrible,” she says, grimacing. “We were covered. Our gear was covered. We were breathing fumes and tasting oil.” Rabalais is worried about the species already under enormous stress from a host of other environmental problems in the Gulf: dead zones, overfishing, chronic oil pollution, seismic testing for oil and natural gas, coastal erosion. “Brown pelicans just came off the endangered species list,” she says, “and now some of their most important breeding rookeries are getting hit with oil.” 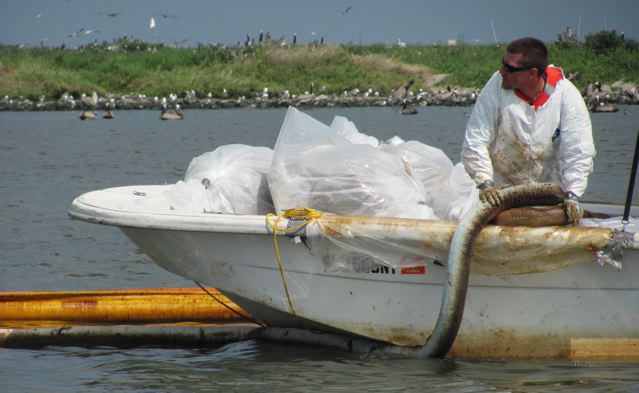 The Heinz Awards (of Teresa Heinz and the Heinz Family Foundation) honored each of today’s recipients with an unrestricted cash prize of $100,000. They described Nancy’s work as:

… on the forefront of efforts to develop and implement large-scale restoration plans for the beleaguered Gulf Coast waters. For decades, [Nancy Rabalais] has continued to be the driving force behind identifying and characterizing the dynamics of the Gulf’s dead zone, which exhibits dangerously low oxygen levels to support vibrant marine life. By studying sediment cores extracted by her team from the Gulf, Dr. Rabalais discovered that the Gulf’s oxygen depletion worsened dramatically since 1950, almost in direct proportion to the use of nitrogen fertilizer that flowed from farming areas into the Mississippi River. This, along with other factors, have led to the Gulf’s dead zone totaling over 7,700 square miles in 2010, the largest in the United States and the second largest worldwide. Her findings were met with political opposition and skepticism from some in the scientific community. She is currently working to help the Gulf recover from the damage caused by the 2010 oil spill and testing whether bacteria that feed on the oil could be contributing to the Gulf’s low oxygen areas.

So, kudos, Nancy Rabalais! I can’t think of another researcher working so courageously in combat conditions on the environmental and scientific frontlines of the 21st century.