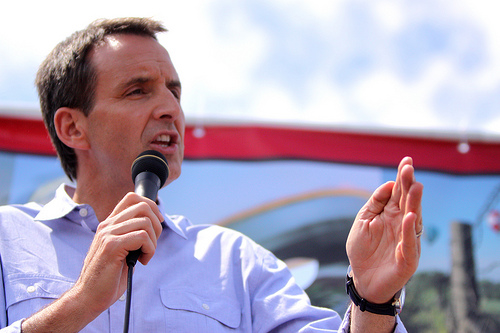 Former Minnesota governor Tim Pawlenty, who ditched his flailing presidential bid early this month, publicly endorsed another ex-governor, Mitt Romney, for president on Monday morning. In his endorsement letter, Pawlenty rips President Obama for failing to jumpstart America’s economy, and claims that “the standing of the United States appears uncertain and adrift under the failed leadership of a president who prefers chastising allies to condemning foes.”

That, apparently, is where Mitt comes in. Here’s Pawlenty:

Alone among the contenders, he possesses the unique qualifications to confront and master our severe economic predicament. His abiding faith in our country’s exceptional historical position as a beacon of freedom will make him the most important leader in a world that depends upon a strong America to stay at peace.

Having served as Governor of Massachusetts, he turned that state’s budget around from deficit to surplus while simultaneously cutting taxes, but that is not the full measure of what he will bring to the Presidency. His time in government was a moment of service—a way to give back to our country-following a distinguished career in the private sector, where he launched companies and turned around troubled ones.

When the 2002 Winter Olympics were on the verge of collapse thanks to a bid-rigging scandal, Romney was asked to take over. The attacks of September 11 created a security nightmare. Romney presided over a highly complex security mobilization, addressed the management troubles plaguing the games, and staged one of the most memorable competitions ever seen on American soil.

Romney is running for president because he is deeply committed to our country, troubled by its current condition, and I believe he can turn it around.

Pawlenty and Romney butted heads plenty on the campaign trail when the Minnesotan was still in the race. T-Paw bashed Romney for signing a universal health care bill into law in Massachusetts, claiming Romney’s reform plan was so identical to Obama’s Affordable Care Act that they both deserved the moniker “Obamneycare.”

But in the end, it was Pawlenty’s hesitance to attack Romney—on health care, on flip-flopping, you name it—that many pundits believe doomed him, a sign of weakness that prevented Pawlenty from ever catching fire in Iowa or New Hampshire. That, and a shortage of cash—something Mitt Romney, a man worth between $190 million and $250 million, doesn’t have to worry about.

Perhaps Pawlenty’s early endorsement is an effort curry favor with Romney and get a leg up on a vice presidential nod should Romney claim the Republican nomination. But a new CNN poll shows shows Romney 12 points behind Texas Gov. Rick Perry among likely GOP voters. Romney will need far more than Pawlenty’s endorsement to close that gap.