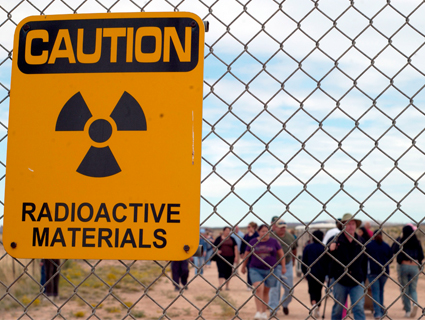 The United States cannot fully account for more than 16,000 kilograms tons of weapons-grade uranium and plutonium that it has shipped to 27 “friendly” countries in recent decades, and it lacks any coherent policy to track down the materials, a Government Accountability Office report concluded late last week. In fact, according to auditors, the country’s atomic accounting is so shoddy that the International Atomic Energy Agency—the same agency sent to search for Saddam Hussein’s weapons of mass destruction—could potentially find the United States in violation of its international anti-proliferation treaty obligations. Even as it has fretted about Iranian nuclear proliferation and alleged Iraqi purchases of yellowcake uranium from Africa, the United States has lost track of enough fissile material to make hundreds of nuclear warhead cores.

At issue are bilateral agreements the US holds with 27 nations, from France to Taiwan, for the transfer of American nuclear materials—fuel, reactors, and reactor components—for “peaceful civilian purposes.” (It’s even conceivable, though not easily determined, that US material may have been present at the Marcoule nuclear plant in France where an explosion killed one worker Monday.) Although the United States has a database, the Nuclear Materials Management and Safeguard System, to track the transfers, the GAO found that the ’50s-era system is more or less useless today: Most of the bilateral export agreements give the US no official power to supervise what happens with the uranium, plutonium, and other materials they fork over. Hence much of the material leaves American sight, and officials simply take the other nations’ word that the stuff has ended up in a civilian reactor.

The Department of Energy (DOE) and the Nuclear Regulatory Commission, which oversee the export of nuclear material to US allies for use in atomic power plants, “do not have a comprehensive, detailed, current inventory of U.S. nuclear material—including weapon-usable material such as highly enriched uranium (HEU) and separated plutonium—overseas,” the GAO report said. Worse still, on the rare occasions when State Department inspectors gained access to the allies’ stockpiles of American radioactive products, all the way up to last year, “U.S. teams found that countries met international security guidelines approximately 50 percent of the time.”

That’s just for the countries that US inspectors actually visited—in other words, the countries that probably pose the smallest concern. “[T]he agencies have not systematically visited countries believed to be holding the highest proliferation risk quantities of U.S. nuclear material, or systematically revisited facilities not meeting international physical security guidelines in a timely manner,” the GAO stated.

That could be a major violation of America’s international treaty obligations. The Nuclear Nonproliferation Treaty, which the United States signed, requires that nuclear export agreements “should commit parties to establish and maintain a system of accounting for nuclear material, with a view to preventing diversion of nuclear energy from peaceful uses,” the GAO report said.

The DOE’s beleaguered atomic security arm, the National Nuclear Security Administration, issued an official response accusing the GAO of “errors in fact and judgment” in its report. “NNSA is working with other partners to secure weapons-usable nuclear materials in additional parts of the world and to strengthen security at civil nuclear and radiological facilities,” wrote NNSA associate administrator Kenneth Powers. “We recognize that further work is needed and we are working with our partners to improve international security.”