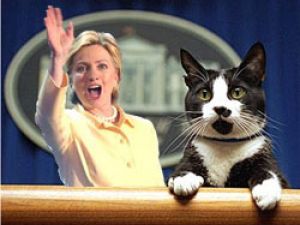 Cat-Nipped: Did Hillary Clinton kill this cat? Sounds like a job for the Maricopa County Cold Case Posse.Photoillustration: Nick Baumann

Maricopa (Az.) County Sheriff Joe Arpaio, who depending on your point of view is either “America’s Toughest Sheriff” or simply the one least constrained by basic standards of decency, announced on Monday that he had deputized a five-member “Cold Case Posse” to investigate whether President Barack Obama was really born in the United States. (Spoiler: He was.)

Despite the unprecendented release of a short- and long-form birth certificate from the state of Hawaii, along with birth announcements in two Hawaii newspapers, Arpaio decided to launch the investigation after being asked to do so by members of the Surprise(!), Arizona, tea party. As he explained to WorldNetDaily: “My door is open to everyone, and I don’t kick them out. If a complaint is legitimate, I don’t dump it into the wastebasket…When I get allegations brought to me by the citizens of Maricopa County, I look into the allegations, just like I am doing here.”

The unit is being funded through a 501c(3) non-profit that’s been set up by the Maricopa County Sheriff’s Department. Arpaio’s announcement comes just as he’s being courted by a slew of GOP presidential candidates—Rep. Michele Bachmann met with Sheriff Joe last week; Mitt Romney and Rick Perry have both called to ask for his endorsement.

One way of looking at this is that it’s a horrible waste of taxpayer resources in a state that’s so cash-strapped it actually sold the state capitol. Another way of looking at this is that it’s a tremendous opportunity to investigate some more totally implausible cold cases. So what else should the Cold Case Posse be looking into? Dave Weigel suggests it re-examine David Ickes’ claim that world leaders are being secretly controlled by a super race of lizard people. Here are some other ideas for the Cold Case Posse: Was Zachary Taylor secretly poisoned? Did Hillary Clinton order a hit on a former aide’s cat? Was Dwight D. Eisenhower secretly controlled by his communist brother, Milton? What if we’re all color-blind and people who are color-blind actually have normal vision? Why does the Maricopa County Sheriff’s Department own a tank?

On a more serious note, this is more evidence of what we pointed out last month: birthers are not going away. And at this point, it doesn’t seem like they ever will.