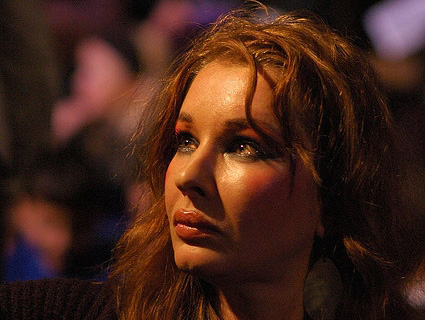 Dance music diva Natacha Atlas’ latest album, Mounqaliba—Rising: The Remixes, kicks off with a sound bite from President Obama’s speech at Cairo University: “We meet at a time of great tension,” his voice reverberates. It’s an unusual start for a dance album. Then again, Atlas had unusual beginnings herself. She grew up in a suburb of Brussels to a Moroccan-Egyptian-Palestinian father and a British mother, worked as a belly dancer, and served as a Goodwill Ambassador for the United Nations World Conference against Racism. To date, she has released seven solo albums and a handful of international Top 40 hits.

Atlas brings a political consciousness to her belly dance grooves, which are fused with the sounds of Turkish ensembles and chamber orchestras. On the new album, consisting of remixes of 2010’s Mounqaliba, she croons in her lush alto over syncopated cymbals, tablas, and violins, and heavy electronic beats. Throughout, audio clips from the economic-conspiracy film Zeitgeist: Addendum add to the tension Obama introduces. “It’s a journey of thinking, as well as nice music,” Atlas told me.

But the record isn’t all agitprop. The tracks are hip-shaking and luscious—including, on the calmer end of the spectrum, a cover of Nick Drake’s “River Man” that Atlas sings partly in Arabic. This mishmash is part of her aesthetic. “There will always be these two identities living within me: Arabic and European,” she told Muslim WakeUp! magazine in an earlier interview. “When I was very young, I tried to ignore my father’s side, the Arabic side, because it was foreign…These days I dream in two languages, and not a day goes by when I don’t end up using Arabic.”

Over her two-decade career, Atlas has migrated from electronic dance to acoustic concept albums and back—mixing it all up on Mounqaliba. She began recording as lead singer of a salsa band in Belgium, and later took up as front woman with the London-based music collective Transglobal Underground, famous for its “ethno-techno.”

“These days I dream in two languages, and not a day goes by when I don’t end up using Arabic.”

In 1995, Atlas went solo, scoring big in France with her many French-language songs. Her mostly acoustic release, 2008’s Ana Hina, earned her love from NPR, and she’s been featured on a surprising assortment of soundtracks: Sex and the City 2, Grand Theft Auto: Liberty City Stories, and Whatever Lola Wants from director Nabil Ayouch. She’s slated for a few upcoming films, too, she says, but she can’t yet reveal which ones.

As for the bouncing about between between acoustic and dance music, Atlas explains, “I made a lot of fans when they were getting into the curvy side of dance and world music: belly dancing, like the uptempo, modern aspect of music—they want it to be fun and party-like.” Yet she still listens to the iconic Lebanese singer Fairouz, whose songs she covered on Ana Hina. Fairouz, she told me, has “one of the most beautiful voices I’ve ever heard.”

She’s also been grooving to recent albums by Radiohead, PJ Harvey, the Lebanese composer Zad Moultaka, and a few dance tracks. “If I’m cleaning house, I like to listen to something light in the background,” she says. At the moment, though, her biggest concern isn’t musical. Egyptian by heritage, she is wondering what will become of Egypt in the wake of Arab Spring. “They’ve managed to remove the old regime and that’s all great,” Atlas says. “But now I think there’s a bit of a struggle…It’s very difficult to stamp out corruption when it’s been there for 30 years, but I’m hoping for the best.”

Here’s a little video mix she put together on the topic: