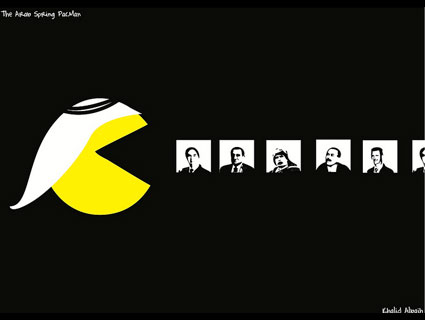 On October 19, Mother Jones reported that the autocratic Syrian regime was using internet filtering technology produced by a California company, Blue Coat Systems, to aid its crackdown on dissidents. On Saturday, after 10 days of heightened media scrutiny and the launch of a State Department inquiry, the company finally admitted what publicly available electronic records made obvious, telling the Wall Street Journal that Syria did in fact use its products.

A Blue Coat spokesman told Mother Jones that the company never sold its technology to Syria. So how did the equipment get there? Blue Coat told the Journal it’s all a big misunderstanding: “[Blue Coat] shipped the Internet ‘filtering’ devices to Dubai late last year, believing they were destined for a department of the Iraqi government. However, the devices—which can block websites or record when people visit them—made their way to Syria.” Of course, selling the technology to Syria—a country subjected to strict sanctions—would violate US law. Blue Coat has told Mother Jones that it does not allow its customers to resell its products to embargoed countries.

Telecomix, a tech activist group, released electronic records in early October that tech experts said proved Syria was using Blue Coat technology to prevent the public from accessing particular websites. Jacob Appelbaum, a tech expert and computer science researcher, told Mother Jones that it was clear the records connected Blue Coat and Syria: “Every IP address in all of the information released is registered in Syria,” he said. And Blue Coat’s technology can do more than just filter the internet, Appelbaum added: “It’s a super policeman with a general warrant who spies on every person, records everything about that person and their activities and then it acts as the judge, jury and executioner.”

“We don’t want our products to be used by the government of Syria or any other country embargoed by the United States,” a Blue Coat senior vice president told the Journal. But although Blue Coat is “saddened by the human suffering and loss of human life” in Syria, the company “cannot confirm how the appliances were transferred from the point of shipment or from Iraq to Syria.”

The State Department, which is looking into the matter, was already aware of the Blue Coat-Syria connection, but the Journal reported that the Department of Commerce has also opened an investigation.

As we noted in our article, Blue Coat’s legal liability for Syria’s use of its equipment is somewhat limited. If Blue Coat customers were required to agree to not transfer the technology to embargoed countries, the company is likely in the clear. “Blue Coat has no legal liability beyond their original sale providing they acquired this and can produce it,” George A. Lopez, a peace studies professor and sanctions expert at Notre Dame University, told us earlier this month.