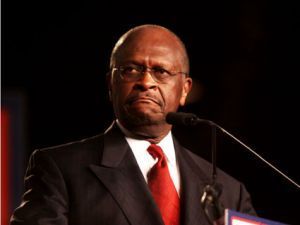 Nia-Malika Henderson reports that in an interview with Piers Morgan last night, Herman Cain seemed to waiver on what he’d do about abortion if elected president:

What it comes down to. It’s not the government’s role or anybody else’s role to make that decision. Secondly, if you look at the statistical incidents, you’re not talking about that big a number. So what I’m saying is, it ultimately gets down to a choice that that family or that mother has to make. Not me as president. Not some politician, not a bureaucrat. It gets down to that family, and whatever they decide, they decide. I shouldn’t have to tell them what decision to make for such a sensitive issue.

Is Herman Cain—gasp!—secretly pro-choice? Was he merely practicing Taqiyya when he cut those radio ads back in 2006 suggesting there was a racial motive to Democrats’ support for abortion, and back in 2004, when he ran for US Senate in Georgia on a platform that abortion was wrong even in cases of rape and incest?

No. Just look at the full context here. On Sunday, Cain told David Gregory he was opposed to exceptions for rape and incest, but when the life of the mother was at risk, “that family is going to have to make that decision.” Morgan asked Cain about those remarks specifically, and so that seemingly sympathetic comment from Cain is referring specifically to abortion when the life of the mother is at risk. Otherwise, Cain’s “you’re not talking about that big a number” wouldn’t make much sense:

A more seasoned politician might have more deftly segued the conversation back into his comfort zone and issued some platitudes about appointing pro-life judges and so forth. But it’s a matter of public record that Cain is not a particularly seasoned candidate, and so he’ll have moments like this. It’s not fair to pin it as any sort of ideological shift, though.