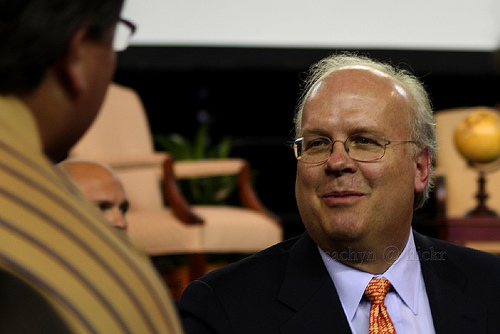 Think of it as Washington, DC’s second earthquake of 2011, except this time it’s not natural—it’s political.

Politico reported on Monday that the two biggest forces in outside political spending—the Koch brothers and Karl Rove’s Crossroads network—have split in their efforts to vanquish Democrats in 2012 and win back the US Senate and White House. Unlike in 2010, when an array of right-leaning outfits, some of them Koch-funded, coordinated their electoral strategies with the Crossroads groups, this time a rift has formed between traditionally Republican and more hard-line, free-market-oriented organizations. And what a money war it will be: For 2012 the Kochs are planning to spending as much as $200 million, while American Crossroads and Crossroads GPS say they’ll spend $240 million.

This rift could be seen clearest during the debt-ceiling fight. While Rove’s Crossroads groups pushed for a deal on a debt bill, Americans for Prosperity, founded and funded by the Kochs, advocated against it. The two sides have also used separate strategies to win over Hispanic voters and build up massive databases of voter information.

Here’s more on the split from Politico:

Behind the competition are ideological and stylistic differences that have bred suspicion between some in each camp.

Some Koch allies blame what they contend is the Rove team’s win-at-all-costs mentality for the decay of fiscal conservatism under former President George W. Bush. And they roll their eyes at Rove’s high media profile. In turn, some in the Bush-Rove axis accuse the Kochs of clinging to free-market zealotry, even if it backfires on Republicans. Others in Rove’s orbit believe the Kochs are too focused on control and not enough on coordination.

The two camps put their differences aside in the run-up to last year’s midterm elections, which conservatives felt had uniquely high stakes. But it’s not clear if that will last, said a Republican strategist familiar with the Koch’s 2010 coordination efforts.

“The 2010 political environment made for some very strange bedfellows,” said the strategist, who requested anonymity to discuss the notoriously press-shy Kochs. “You’ve got Rove and those guys who are driven by electing Republicans for Republicans’ sake and then you’ve got the Kochs who have this giant corporate empire and say it’s all about the free market.”