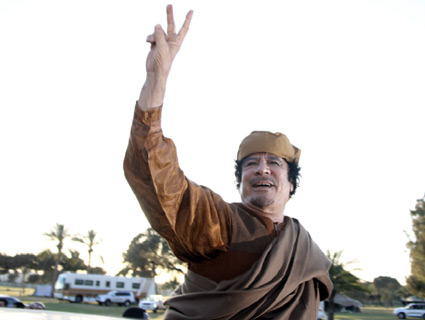 Multiple media outlets are reporting that Moammar Qaddafi, who ruled Libya for 42 years before being toppled by a NATO-backed revolution, was killed by Libyan rebel fighters following a battle in his hometown of Sirte. The graphic pictures coming out of the region suggest the news is accurate.

Conflicting reports about when Qaddafi died raise some questions about the nature of his death, however: Some say he died during the fighting, while others claim he died after being captured. If Qaddafi was killed during combat or succumbed to his wounds later, his death would be consistent with international law. If he was killed post-capture, however, that’s a violation of the Geneva Conventions and a war crime.

The event marks a belated triumph for Libya’s Transitional National Council and the Obama administration, which intervened in Libya back in March without congressional approval and relied on a dubious legal interpretation of the War Powers Act to avoid seeking sanction from Congress after the operation lasted longer than the “days, not weeks” initially assumed.  The White House said that the intervention was necessary to avoid a “Srebrenica on steroids,” referring to a 1995 slaughter of Bosnian Muslims during the Bosnian War. Qaddafi had threatened to massacre Libyans protesting his government. Though many in Congress expressed outrage at the president’s unilateralism, neither opponents nor supporters of the operation could muster enough votes to fund the operation or restrict the United States to a supporting role.

Qaddafi’s death neutralizes the possibility of him leading a revanchist insurgency and prolonging the violence in Libya for months or even years to come; the commander of the NATO air campaign in Libya recently described the pro-Qaddafi forces as “resilient and fierce.” Nevertheless, the difficult work of creating a functional democracy is yet to come, and it will likely prove far more difficult than removing Qaddafi from power.