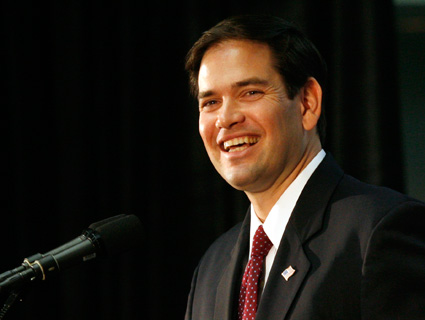 For the past several years, conspiracy-pushing activists have been alleging that President Obama is not qualified to be president because, they claim, he was born in Kenya or that he’s not really a “natural born citizen.” The birthers have filed lawsuits, bought billboards reading, “Where’s the birth certificate?”, and sought legislation that would require presidential candidates to prove their American citizenship before gaining access to state ballots. None of this has gone anywhere. Most of the bills have failed. And, in a fit of exasperation in April prompted by Donald Trump’s embrace of the issue, Obama defused much of the birther campaign by posting his long-form birth certificate online.

Birther Charles Kerchner has a blog that was once devoted mostly to Obama, but lately he’s been on a campaign to illustrate that Rubio is not a natural born citizen, and thus, ineligible to enter the White House. Kerchner’s logic is convoluted—something of a trend among the birther set. He claims that Rubio is actually a Cuban citizen, even though Rubio was born on American soil, in Miami, in 1971. But Rubio’s parents were Cubans, who didn’t become US citizens until 1975. (Kerchner went so far as to obtain Rubio’s parents’ naturalization papers from the National Archives to prove his point.) Thus, Kerchner posits, Rubio doesn’t meet the “natural born” requirement set out in the Constitution, because his parents weren’t American citizens. Birthers have tried this argument on Obama as well, because his father was Kenyan. But the argument didn’t have much success then, and it’s not likely to have much success now.

Kerchner isn’t the the only one in his camp who believes Rubio can’t be president. The queen of the birther movement, Orly Taitz, also agrees. Taitz, who has spent years in court suing Obama over his eligibility, told the St. Petersburg Times this week, “We need the court to finally adjudicate this issue, who is a natural born citizen.” Rubio, for his part, was nonchalant about becoming the birthers’ newest target. “The price of our freedom and our liberty is that people can go out and spend a lot of time on stuff like this,” he told the paper. “For us, the more important thing is to focus on our job.”

The birthers clearly need more to work on, given the extent to which they’ve exhausted most avenues for challenging Obama. Rubio will certainly help fill the bill, and just in time, too, for the upcoming “birther summit” in March. Kerchner and others who’ve been undaunted by Obama’s efforts to take the steam out of their movement are planning a “massive” rally and summit in DC, where they intend to protest Washington’s “continued cover up of the fraud that has been perpetrated upon us.”