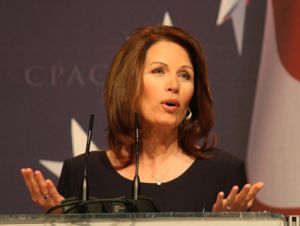 On Saturday, Rep. Michele Bachmann (R-Minn.) became the first GOP presidential candidate to sign a pledge from an anti-immigration group Americans for Securing the Border. Per the group’s website, the pledge compels Bachmann to complete a 2,000-mile-long fence, from San Diego to Brownsville, by December 31, 2013—or 11 months into her hypothetical first term in office. It would be a double-fence, because sometimes one fence just doesn’t cut it, and it will be, Bachmann says, contiguous: “It will be every mile, it will be every yard, it will be every foot, it will be every inch of that border, because that portion you fail to secure is the highway into the United States.” On Tuesday at the GOP presidential debate in Nevada she doubled-down on the pledge.

Bachmann’s talking a good game for the conservative primary electorate. The problem for her is that building such a fence in such a short period of time is logistically impossible—and even if we could build it, we probably wouldn’t want it. Bachmann’s plan is intended to serve as a counter to the actual border wall being constructed, initiated under President Bush and nearing completion under President Obama, which is a mix of both physical and virtual (involving a network of cameras and drones, among other things). In some places, the fence looks like the kind of intimidating edifice that always finds its way into campaign ads. But in some stretches, it’s a lot different.

That’s because the Southwestern United States, unlike, say, Minnesota, consists of large stretches of unrelenting desert that’s deadly to anyone crossing on foot and impassable for motor vehicles. In those stretches, the Border Patrol functions less as a national security outfit than as a humanitarian agency. It also includes thousands of square miles of wildlands of various degrees of federal protection—most notably Big Bend National Park, which hugs the Rio Grande in Texas for 244 miles. The Department of Homeland Security has concluded that a fence isn’t necessary in the Big Bend. That’s because Big Bend looks like this: 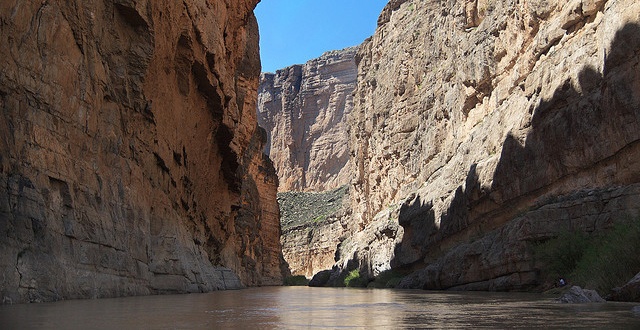 The wet, shiny part is the US–Mexico border: Longhorndave/Flickr

As you can see, a reinforced double-fence with razor-wire and lions or what have you would be, like, the seventeenth most daunting barrier to getting from one side to another. Even in the portions where the river isn’t hemmed in by towering sandstone cliffs, there are other problems. Building a fence along the Rio Grande floodplain would essentially turn the structure into a dam when the river spills over, and could potentially alter the course of the river itself—which in turn would alter the border, and put the United States in violation of the international treaties.

“It would be physically impossible to achieve by 2013, is my estimation,” said Matt Clark, of the environmental group Defenders of Wildlife. “Even if they do waive all the laws, I think the Beltway is just completely out of touch with the on the ground realities of the border. From what you’re telling me about Michele Bachmann, there is no way. And then you have to ask the question: what does ‘complete’ mean? Has she ever been to the Big Bend to see how it would not make sense there?”

As a protected area (not to mention a UNESCO Biosphere Preserve), it’s incredibly difficult to build much of anything in Big Bend without a lengthy review process including a public comment period and an environmental impact statement. That makes a 2013 deadline pretty much impossible. As even Rick Perry seemed to concede on Tuesday, we could try to build a fence on every inch of the border. But why?

I put the question of whether Bachmann would seriously build a double fence through the national park to her campaign, but haven’t heard back.