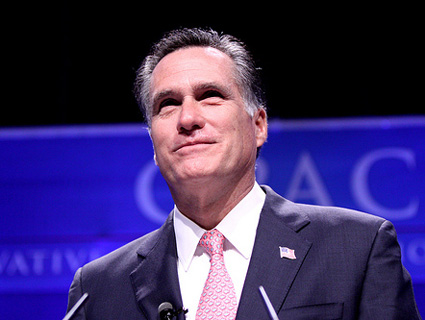 As recently as a few months ago, Mitt Romney was saying sort of reasonable things about climate change, like that it was real and that humans were contributing to it. But here he is at a fundraiser Thursday night:

My view is that we don’t know what’s causing climate change on this planet. And the idea of spending trillions and trillions of dollars to try to reduce CO2 emissions is not the right course for us.

The remarks, which Think Progress posted on Friday morning, were made at a fundraiser at the Consol Energy Center in Pittsburgh. (Yes, it’s named after Consol, the coal company.) They have touched off the latest round of “Mitt is a big ol’ flip-flopper” on the interwebs.

Here’s the thing though: Romney’s been squishy on climate for a long time. Even when he said reasonable things about it in June (and was lambasted by the right for doing so), he was sure to include wiggle words like, “may”:

“I believe the world is getting warmer, and I believe that humans have contributed to that,” he told a crowd of about 200 at a town hall meeting in Manchester, New Hampshire.

“It’s important for us to reduce our emissions of pollutants and greenhouse gases that may be significant contributors.”

Then a few weeks later, his campaign got into a squabble with reporters over that quote, arguing that Romney doesn’t actually think that greenhouse gases are “pollutants.”

This has always been Romney’s approach to talking about climate change. In 2004, his administration released the Massachusetts Climate Protection Plan. But even when he rolled it out, he noted that he wasn’t entirely sure global warming was happening. He was also part of the group of Northeastern governors who led the Regional Greenhouse Gas Initiative. But then he changed his mind in 2005 and bailed on the pact.

That was his approach the last time he was campaigning for the GOP presidential nomination. Here he is at a town hall meeting in May 2007, also employing wiggle words:

There are a lot of people who are concerned about global warming. I think we’re probably experiencing a change in our climate. Human activity may well be contributing to it. I think it probably is. What I don’t know is how much of the change is due to human activity, and what action we can take that would change the trajectory of the things we’re seeing.

Later that year, Romney released information about his policy platforms, including his stance on global warming. Ryan Lizza noted this in a New Yorker profile of the candidate:

In it, Romney refers to the “debate” over “how much human activity impacts the environment”—code words for the global-warming-denial crowd. He offers no plan to “dramatically” curtail emissions of CO2, just an aside that “we may well be able to rein in our greenhouse-gas emissions.”

This is Romney’s M.O.: He says things that sound vaguely reasonable, but he doesn’t commit himself to anything. And then when it comes time to actually take action, he jumps ship.