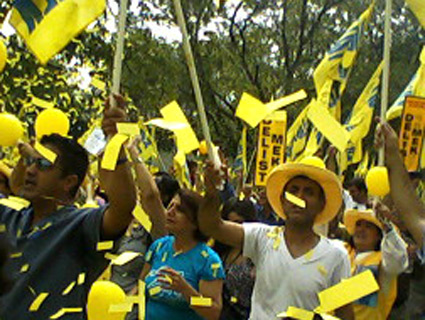 MEK supporters rally in front of the US State Department on August 26.Photo: Asawin Suebsaeng

Over the years, the Iranian opposition group and State Department-listed terrorist organization Mujahideen-e-Khalq (MEK) has won a bizarro patchwork of high-profile supporters. John Bolton, Gen. Wesley Clark (Ret.), big-time Republican lawyers Victoria Toensing and Joseph diGenova, Tom Ridge, Howard Dean, and Nobel Peace Prize laureate Elie Wiesel have all called on the US government to stop treating the MEK, also known as The People’s Mujahideen of Iran, as a terrorist group. This obscure Paris-based outfit—labeled a cult by its critics—that has assembled such an impressive roster of backers now also has the help of Brown Lloyd James, a major international PR firm with a track record of taking on controversial clients.

Also read: Six repressive rulers who hired PR firms to help clean up their imagesIn late August, hundreds of MEK supporters descended on Washington, protesting the group’s foreign terrorist organizations (FTO) listing in front of the State Department with attendees yelling slogans like “We want justice, we want peace, we want MEK off the list!” Speakers including former Rep. Patrick Kennedy (D-R.I.) and ex-Pennsylvania Gov. Ed Rendell held forth on why they believe the group is the best hope for secular democracy and human rights in Iran. (The MEK’s FTO status is currently being considered by a court-mandated review.)

The well-organized event and high-profile speakers indicated the kind of large-scale, well-funded MEK lobbying enterprise that has been suggested by various media outlets. Jila Kazerounian, one of the rally’s press liaisons, was quick to quash that notion. “There is no MEK lobby, that you read about in these articles,” she said. “The closest thing we have to a lobby is the money from grassroots supporters; these Iranian Americans—educated, doctors, businessmen, lawyers, young, old.” Nevertheless, in the thick of the crowd was a Brown Lloyd James account executive who told me he was taking notes on the rally for his superiors in Manhattan.

In May 2011, the firm was hired by a Germany-based MEK backer named Ali Taslimi working on behalf of Camp Ashraf, a refugee camp in Iraq north of Baghdad that houses over 3,000 Iranian MEK members and supporters. For an initial fee of $40,000, Brown Lloyd James signed on to provide political consulting services and “a broad range of public relations services for the months of May and June 2011” to Camp Ashraf, which is officially listed as the client.

Brown Lloyd James, a US-British company that specializes in government relations (i.e., lobbying), advertising, and “reputation management,” handles the accounts of Al Jazeera English, the government of Qatar, Forbes, and even the composer Andrew Lloyd Webber. But some of its clients are decidedly less savory. In fact, helping MEK supporters isn’t necessarily the most controversial thing Brown Lloyd James has done recently: This year, the firm made news for doing business with the Qaddafi regime in Libya and the Assad dictatorship in Syria—in the latter case, $5,000-per-month work that included landing a fawning Vogue profile of Syrian first lady Asma al-Assad. In an ironic twist, Brown Lloyd James was hired to publicize a September 23 New York bash held by the Logo for Human Rights project, a competition endorsed by Mikhail Gorbachev that aimed to crowdsource a fresh logo that would “become as iconic as the peace sign and serve to advance the global spread…of human rights.” (After the news broke, which highlighted the firm’s work for clients with dubious human rights records, the project said that it would sever its ties with the firm.)

But while the company is obviously no stranger to controversy, lobbying for delisting the MEK presents uniquely tricky legal issues—particularly when it comes to the material support for terrorism statute, which prohibits providing aid or resources to designated terrorist organizations. Brown Lloyd James maintains that it works with supporters of the MEK, not the group itself. However, experts on counterterrorism law say the firm’s MEK advocacy may still be problematic.

“Whether the MEK should or should not be listed is one thing, but the law is very clear that third parties and intermediaries don’t insulate you,” says David Cole, a professor of law at Georgetown University. “Think about how the United States would respond if [American] citizens were actively working with a PR organization to support the legitimacy of Hamas in Gaza? Here, the only thing protecting the people involved is that they include the former homeland security secretary, not the kind of people the government wants to prosecute…If circumstances were different, they would be scrambling for a good criminal defense…And the same goes for any public relations firm.”

Brown Lloyd James maintains that it works with supporters of the MEK, not the group itself. However, legal experts say the firm’s advocacy may still be problematic.

The language of the material support statute is broad enough to encompass the activity of a PR firm, according to Robert Chesney, a professor and international security expert at the University of Texas School of Law. However, Chesney recognizes that a First Amendment defense might have some traction. “There is a free speech issue here, as we are talking about advocating changes to government policy and that is protected if you are doing it independent of the listed group, even if it aids the group indirectly,” Chesney says. “At the end of the day, if I were a lawyer advising a PR firm, I would say you have to be very clear as to who you’re dealing with here. As a firm doing this kind of work, you have to know that how the facts appear to you might not be how they appear to those pursuing prosecution.”

Brown Lloyd James denies that it’s in murky legal terrain. “Iranian-American communities are perfectly within their rights to work with anyone they want,” Mike Holtzman, a partner in the firm’s New York office, said in an email. “They are exercising their First Amendment rights.”

Though the MEK has built up a powerful base of political support in the West, there is still much debate surrounding the group’s true nature. The MEK and their supporters say the group is the oppressed, Western-friendly, and pluralistic antidote to President Mahmoud Ahmadinejad and the Islamic republic. But there’s more to the story. Since its founding in Tehran in the mid-1960s, the group, which began as a synthesis of Islamic principles, left-wing politics, and violent resistance to the Shah, has been accused of grave breaches of human rights, indiscriminate mass slaughter (including the deaths of three Americans in 1976), and a totalitarian, hero-worshipping culture.

Critics claim that the MEK’s zigzagging alliances—initially supporting the clerics in the 1979 revolution, then challenging their power, then fighting on the side of Iraq throughout the brutal Iran-Iraq War—have made the group unpopular among Iranians, even those who abhor the current regime. Many also allege that MEK fighters—including current leader Maryam Rajavi herself—were part of a death squad that did Saddam Hussein’s bidding during the 1991 Shiite and Kurdish uprisings.

The group’s supporters brush off the negative press as rooted in the propaganda machines of the Shah, and later the Ayatollah, and view the continuation of the MEK’s 1997 Foreign Terrorist Organizations listing as a cynical, naive sop by the Obama administration to the Iranian government. “Some members of the media have bought all that propaganda wholesale,” Ali Safavi, president of Near East Policy Research and an organizer behind the well-publicized State Department rally, said. “The Iranian regime has taken a page right out of Joseph Goebbels’ book. [The regime has] spent millions upon millions of dollars in their campaign against the MEK.”

Meanwhile, though, vast sums of money have reportedly been paid out to speakers at pro-MEK events. Among the recipients is Howard Dean, who has written in support of the organization and has been a paid speaker at MEK-related events since January 2011. He says that he was hired via the New York-based Harry Walker Agency to appear at events “sponsored by groups in the Iranian American community, not the MEK.” MEK supporters and event organizers stress that their advocacy is bankrolled by the “Iranian American community.” But what remains a mystery is exactly where the funding that fuels these costly MEK lobbying operations comes from, or what central entity, if any, coordinates the effort.

Brown Lloyd James declined to discuss its pro-MEK work or the firm’s relationship with supporters and activists, though Holtzman did offer to field questions on “the humanitarian outrages taking place against the people in Camp Ashraf.” Just the same, Holtzman’s firm has a decidedly nuanced view when it comes to the MEK’s primary oppressor. Peter Brown, the president of Brown Lloyd James, told the Financial Times in late August that he would “love to take on Iran as a client” because “there are areas of commonality that ought to be exploited.”