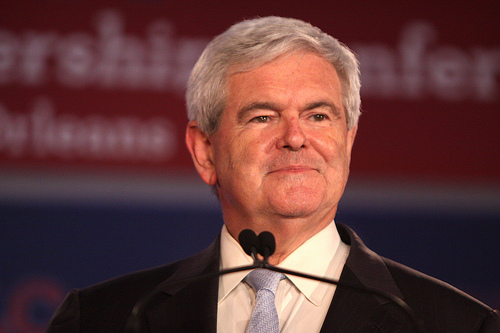 Republican presidential candidate Newt Gingrich has no problem with flying solo. After his campaign imploded this summer, with the departure of his longtime spokesman, campaign manager, and key aides around the country, Gingrich took it in stride, forging on with his thin, debt-ridden campaign. On Monday, Gingrich promised to bring that go-it-alone mentality should he win the White House in 2012. (RealClearPolitics’ average polling data shows Gingrich mired in fifth place, with 9.2 percent of support. Mitt Romney leads with 22 percent.)

At a gathering of the Conservative Club of Des Moines, Gingrich said he wouldn’t make the mistake of surrounding himself with sharp-elbowed, opinionated economic advisers offering conflicting advice—a criticism leveled at President Obama, most clearly in Ron Suskind’s book Confidence Men. Here’s what Gingrich said, as quoted by Huffington Post’s Michael J. Hunt:

Calling the President “the best food stamp president ever,” Gingrich didn’t hesitate to take further jabs at Obama by saying that he “won’t need to rely on [Treasury Secretary] Timothy Geithner or [former White House economic adviser] Larry Summers for counsel when I am president,” and said “the best economic advisor I’ll have is me.” This statement seemed to resonate with the audience members.

This, of course, is the same Gingrich whose campaign racked up $1 million in debt in a short period of time (and is still paying it off), and the same Gingrich who, in 1993 as House speaker, slammed President Bill Clinton’s budget, which raised taxes, as a job-killer and a big step down the road to recession. Of course, the opposite happened: Thanks in part to Clinton’s policies, the US economy added 21 million jobs during his spell as president. The economy soared through the 1990s. Gingrich got it wrong.

Gingrich, you could say, is promising the opposite of what Reagan preached. After all, it was Reagan who described his leadership style thusly: “Surround yourself with the best people you can find, delegate authority, and don’t interfere.” Surely Gingrich—a history buff and a Reagan lover if there ever was one—must know that defying the Gipper is no way to win the GOP presidential nod.