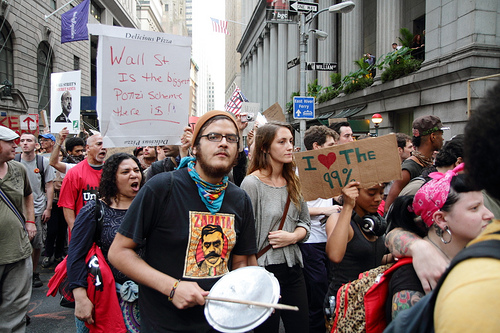 President Obama made his first public comments on the growing Occupy Wall Street protests in a press conference on Thursday. “I think it expresses the frustrations that the American people feel that we had the biggest financial crisis since the Great Depression, huge collateral damage all throughout the country, all across Main Street, and yet you’re still seeing some of the same folks who acted irresponsibly trying to fight efforts to crack down on abusive practices that got us into this problem in the first place.” He went on, “So yes, I think people are frustrated and the protesters are giving voice to a more broad-based frustration about how our financial system works.”

“Look, that’s a really fair question. Let’s be honest with one another. What is the core of that protest? The core is: The bargain has been breached. The core is: The American people do not think the system is fair, or on the level. That is the core is what you’re seeing with Wall Street. Look, there’s a lot in common with the Tea Party. The Tea Party started, why? TARP. They thought it was unfair.”

Obama’s and Biden’s sympathetic remarks are big news—not just because they come from the president and vice president of the United States, but also because they signal a possible shift within the Obama administration. Consider what Bill Daley, the White House chief of staff, said about Occupy Wall Street on Tuesday, which was far less encouraging:

“I don’t know if it’s helpful. I wouldn’t characterize it that way. Look it—people express their opinions. In the new social network world, they can do it pretty effectively outside the normal way, historically, people have done it. So whether it’s helpful to us, or helpful for people to understand in the political system that there are a lot of people out there concerned about the economy—I know the focus is on Wall Street, but it’s a broader discussion that we’re having.”

Treasury Secretary Tim Geithner was similarly indifferent. Asked by Atlantic editor James Bennet if he felt any sympathy for the Occupy Wall Street protesters, Geithner replied: “No, I feel a lot of sympathy for what you might describe as the—as a general sense among Americans is whether, you know, we’ve lost a sense of possibility.”

But if Daley and Geithner doesn’t feel much sympathy, Obama and Biden apparently do. And that’s a big development for the angry, boisterous protesters making their home in Zuccotti Park.