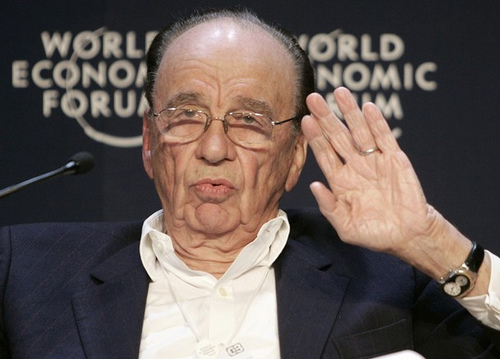 News Corp. boss Rupert Murdoch has spent the last six months or so battling a rash of bad press over allegations that his UK-based News of the World tabloid engaged in phone-hacking and other unseemly journalistic practices that resulted in his closing the paper all together. His most public appearances have been before the British Parliament, defending his company from a high-level investigation. But on Friday, Murdoch made an altogether different sort of appearance in the US, headlining an education summit hosted by former Florida Gov. Jeb Bush.

Murdoch has taken a sudden interest in the plight of poor American school children languishing in substandard schools, which he says have lower standards than “American Idol.” Of course, Murdoch’s interest in public schools seems mostly because of the money to be made there. He’s said that he sees the American education sector as a $500 billion market that’s largely been untapped by companies like his. News Corp. ventured into this world last year by purchasing the ed tech company Wireless Generation and hiring former New York City schools chancellor Joel Klein.

But on Friday, Murdoch was all reformer, even though his speech was frequently interrupted by hecklers from Occupy Wall Street and elsewhere who yelled that he is “the worst thing that ever happened to education.” As the owner of Fox News, Murdoch didn’t seem much fazed by the disruptions. He went on to cite the now-familiar and dismal statistics about how few American high school graduates leave school prepared to do college-level work. “In truth, it’s the kind of number you would expect from a Third World country,” Murdoch said, prompting more boos and heckling.

As the cure for what ails the public schools, Murdoch invoked his “good friend Steve Jobs” as inspiration for how the country ought to approach school reform, even making classrooms look more like Apple stores.  Of Jobs, he said:

Well, we have to care. In this new century, good is not good enough. Our children are our destiny. We have wasted enough time. At stake now is the defining promise of the American Dream: the promise of upward mobility for each new generation.
Put simply we must approach education the way Steve Jobs approached every industry he touched. To be willing to blow up what doesn’t work or gets in the way. And to make our bet that if we can engage a child’s imagination, there’s no limit to what he or she can learn.

Invoking the recently departed Jobs was a smart move by Murdoch. After all, although the public education establishment might recoil in horror at the idea of News Corp. getting into the classroom, few Americans see Apple that way. Apple and Jobs don’t carry any of the baggage that News Corp and Murdoch do. Apple is the quintessential technology company, beloved as the maker of the iPod and the instigator of creative destruction. If Apple ran the schools, things might be different, Murdoch argued. But Rupert Murdoch is no Steve Jobs. He’s the former employer of Glenn Beck. The protests during his speech suggest that he’s going to have a difficult time convincing the education establishment that he’s serious about the poor African-American and Latino students he cited in his speech and not simply looking to move some high-tech version Fox News Inc. into the public classroom.