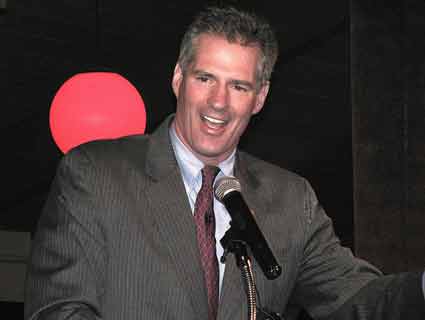 At Tuesday night’s primary debate, Warren, the frontrunner for the Democratic nomination to challenge Brown, used a question about how she paid for tuition to take a jab at the freshman Senator. “I kept my clothes on,” Warren said, referring to Brown’s famed nude Cosmopolitan spread.

Brown could have brushed off the attack, but instead, he decided on the worst possible course of action. According to Boston journalist Joe Battenfield, Brown said “Thank God,” in response to Warren’s jab. You can hear the audio of the comment at 3:30 here:

A Warren campaign spokesman declined to comment, but to state the obvious: By saying “Thank God,” Brown was implying that Warren is ugly. Brown’s comment might seem hilarious to your average bro, but elections aren’t won by bros alone. Attacking your female opponent for her looks won’t necessarily play well with women voters, and Brown can’t afford to lose much more ground than he already has: several polls have already shown Warren within striking distance of the incumbent.