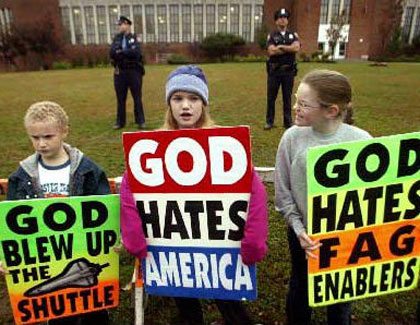 If you’re ever at a loss for what the Westboro Baptist Church in Topeka, Kansas, is all about, take a gander at its website, tastefully titled GodHatesFags.com. There, you’ll learn that a “modern militant homosexual movement” poses “a clear and present danger to the survival of America.” And that to combat this menace, the church has conducted 46,635 demonstrations since June 1991 “at homosexual parades and other events, including funerals of impenitent sodomites (like Matthew Shepard) and over 400 military funerals of troops whom God has killed in Iraq/Afghanistan in righteous judgment against an evil nation.” At these protests, church members parade around with signs declaring “FAGS BURN IN HELL” and “THANK GOD FOR AIDS.”

Predictably, bloggers are having a field day with the delicious irony that the tweet condemning the iPhone’s progenitor came…via iPhone.

Reached by phone Thursday, Fred Phelps Jr.—Fred Sr.’s son and one of the roughly 100 members of the church—expanded on his sister’s rationale for the planned picket. “The main thing in my mind,” Phelps said, “is that [Jobs] operated in a company that was recognized around the world as being gay-friendly.” Phelps wasn’t sure where this recognition came from, but he insisted, “I’ve read that several places. I don’t think there’s any dispute about that.” (In 2008, a Prime Access/PlanetOut poll determined Apple to be the second most gay-friendly American brand, behind only Bravo.)

Above all, Phelps seemed disgusted at the media’s deification of Jobs in the hours after his death. “I saw something on CNN, and they were interviewing a guy about Mr. Jobs, and in big bold letters across the screen it said that heaven has now been upgraded,” he complained. “So now, you know, you got all the media around the world saying he’s going to heaven.” Suffice it to say, Phelps foresees Jobs spending eternity someplace a little less cushy.

As for railing against a “gay-loving” company and its public face by using their own products, Phelps failed to see the irony. “I mean, anyone involved in any profession is using this technology nowadays,” he said, somewhat bemused by the question.

Margie Phelps posted a more colorful explanation on Twitter. “Rebels mad cuz I used iPhone to tell you Steve Jobs is in hell.God created iPhone for that purpose! :)” It’s worth noting that this tweet (and her others since) came “via web.” No word yet whether the computer in question was a Mac.