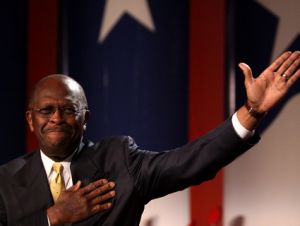 One of the most interesting stories to come out of the Herman Cain presidential campaign hasn’t actually been written yet—and it might not be for a while, until after he drops out of the race, Fox News contract in hand, sometime before, during, or after, the early primaries. I’m speaking, of course, about the post-mortem, the campaign ritual in which disaffected former staffers spill the beans about what a horror show they endured for however-many months. (Joshua Green’s email-heavy deconstruction of the Hillary Clinton campaign is canon for this genre.)

But the New York Times has a hint of what’s to come today:

And then there was that e-mail to the staff about traveling in a car with Mr. Cain: “Do not speak to him unless you are spoken to,” the memo said.

“I found it odd,” said a former staff member who liked to prep Mr. Cain for appearances while driving. The aide, who spoke on the condition of anonymity, quit not long afterward, citing the e-mail as one of the deciding factors…

Setting up offices was also something of a trial. “When I told people, ‘You’ll be getting offices and phone lines,’ I’d have to postpone that,” the former staff member in Iowa said. “It was like they were running for sophomore class president.”

Mr. Hall added, “We couldn’t even get our own e-mail addresses,” for the campaign.

Emphasis mine. Cain’s spokesman, J.D. Gordon, notes correctly in the piece that the book tour—dismissed by many ex-staffers—has been a big success. But that’s assuming that the goal of the book tour was to sell a lot of books and turn his candidate into a celebrity; if the goal was to build a campaign organization capable of getting out the vote in critical early primary states, well, Cain might have been better served by actually visiting early primary states.