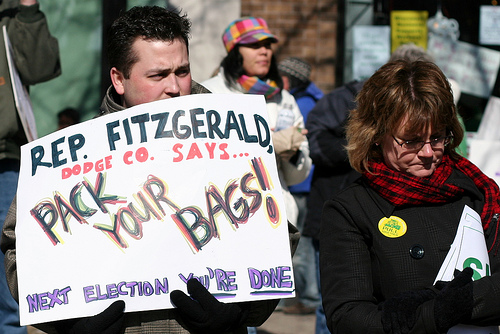 When you think of gerrymandering, shady back-door dealings, and brazen acts of dirty politics, state capitals like Albany, Austin, and Sacramento come to mind. But the Republican-controlled legislature in Madison, Wisc., is giving the most brazen of them a run for their money with a pair of rushed bills aimed at blunting recall efforts targeting GOP Gov. Scott Walker and Republican state senators.

The first bill Wisconsin Republicans are trying to ram through would force (PDF) individuals collecting signatures for a recall petition to have their own signatures notarized. Currently in Wisconsin, people who circulate petitions are required, on each petition, to sign, date, list their residence, and attest that all the signatures they gathered are real, accurate, and belong to people in the correct jurisdiction or district. Fudging signatures is no laughing matter: Filing a phony petition is a felony offense.

Now Republicans want to add one more hurdle with the notary requirement. Critics call the bill as “unnecessary and redundant” and, in the near term, a transparent attempt to gum up the effort to recall Gov. Walker which begins November 15th, for which recall activists must gather, at a minimum, about 550,000 signatures. (United Wisconsin, a grassroots group leading the recall push, says it wants to get upwards of 700,000 John Hancocks.)

Then there’s Wisconsin Republicans’ redistricting scheme. Some background: Earlier this summer, GOPers in the legislature fast-tracked legislation redrawing the state’s congressional and state legislative districts to favor Republicans. This is better known as gerrymandering, a tactic both parties use to make sure their members run in the most favorable districts possible. Walker signed the two redistricting bills in August.

State law says those new boundaries go into effect November 2012. But if Wisconsin Republicans get their way, that won’t happen. A bill introduced by Sen. Mary Lazich (R) would implement the redistricting legislation—but only for state senators—a year early, in early November 2011. Why? Lazich told the Milwaukee Journal-Sentinel

Republicans control both the Assembly and Senate in Wisconsin, but they’ve hit a snag with the redistricting bill in the form of moderate Republican Dale Schulz, a state senator. Schulz, who would’ve cast the Senate GOP’s decisive 17th vote, told the Associated Press he won’t vote for the redistricting bill.

Meanwhile, Wisconsin Republicans have faced a barrage of criticism for their blatant efforts to slow down the recall process. “Unconcerned about the state Assembly, Republican senators are flailing frantically for ways to protect themselves,” wrote Carolyn Fiddler, communications director for the Democratic Legislative Campaign Committee. “Their tricks reek of desperation, and we expect Wisconsinites to see right through their flimsy disguises.”