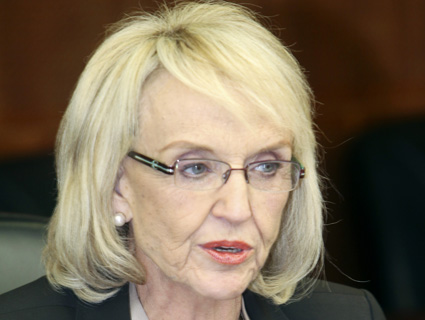 The Arizona Supreme Court issued a stern rebuke to Gov. Jan Brewer on Thursday, reinstating the chairwoman of the Independent Redistricting Commission (IRC) that Brewer tried to oust earlier this month, the Arizona Republic reports.

In 2000, Arizonans voted to create a non-partisan commission to run the redistricting process. States re-draw their district lines once every decade to reflect changes in population, drawing on data from the latest US Census. But, in many states, if one party controls the state’s legislature, as well as the governorship, it can push through an electoral map that favors its interests for the coming decade. Because so much is at stake, redistricting fights frequently devolve into bitter, partisan warfare (like in Texas in 2003, when Republicans pushed through a GOP-friendly plan even though it was a non-Census year)—something that voters in Arizona hoped to change by creating the IRC.

But earlier this month, Brewer and state Republicans forcibly removed Colleen Mathis, the independent chair of the five-member commission. Brewer accused Mathis of drawing a Democrat-friendly map. She also alleged that Mathis violated the state’s open meetings law by negotiating a backroom deal with a map-making firm with ties to the Democratic Party.

On Thursday, the Arizona Supreme Court heard arguments from the IRC’s attorneys challenging Mathis’ removal. They found that Brewer’s reasons for the ejection failed to demonstrate “substantial neglect of duty, gross misconduct in office or inability to discharge the duties of office.” The court also sent a strong message to Brewer: that it holds the last word when it comes to removing public officials from office.

In her response to the court, Brewer argued that reinstating Mathis showed that the court had “averted its eyes from the Commission’s misdeeds,” and that her “actions to meet in secret, arrange critical votes in advance of meetings and twist the words and spirit of the Constitution have been forgiven—if not endorsed outright… The clearest victim in this matter is a redistricting process that voters intended to be honest, impartial and transparent. In the coming days, I’ll be considering my options as to how best to proceed.”

One option: presenting a case to the court that more specifically spells out her argument for removing Mathis. For Brewer, this isn’t over yet.