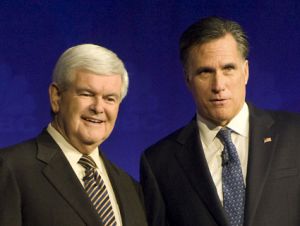 The two GOP frontrunners are again clashing over immigration, with Newt Gingrich playing the role of immigration moderate to Mitt Romney’s border hawk. The only problem is neither label fits either candidate comfortably.

This morning, Bloomberg revisited Romney’s past support for Bush’s 2006 immigration reform plan. As I wrote in September, Romney tried to have it both ways on the issue in 2008, after the once-moderate Senator John McCain (R-Ariz.) became his main rival for the Republican presidential nomination. More awkward? Moderate-sounding Gingrich opposed the Bush immigration reform proposal at the time, and in the most inflammatory and inaccurate terms possible, saying that the McCain-Kennedy bill would grant “potential terrorists and gang members” legal status. Gingrich also authored a white paper titled “Fool Me Once,” which argued that the anti-illegal immigration enforcement promises made by Bush-era reform supporters would prove to be as empty as those made by supporters of the 1986 amnesty bill signed by President Ronald Reagan. Bush’s immigration reform proposal was famously tanked by revolt from within his own base.

Gingrich did outline a proposal for comprehensive immigration reform for National Review in 2006. It looks a lot like what he’s proposing now. Gingrich wanted an English-language requirement, “citizen juries” to decide whether or not to deport unauthorized immigrants, a guest worker program, and privatized employment verification procedures. It’s not the deportation-only policy preferred by the Republican base, but it also raises the question of whether Gingrich opposed Bush-era immigration reform (which would have accomplished many of the same goals through alternate, less-Gingrichy means) because it was too moderate, or because, like Romney later on, he put his finger in the wind and figured out which way it was blowing. From the perspective of anti-immigrant conservatives, of course, there’s no real difference between Gingrich and Bush.

Republican voters can find plenty of evidence for the argument that both Romney and Gingrich are “squishes” when it comes to illegal immigration. When it comes to consistency, however, Gingrich can make a credible case that he’s not the flip-flopper Romney is. Whether his preferred immigration policies are any more workable than mass deportation is a different question.