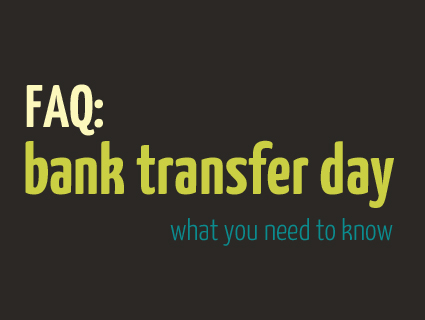 Saturday is the deadline for Bank Transfer Day, the call for a mass money exodus from big banks to credit unions and small community banks. Over 80,000 have pledged online to punish “too big to fail” banks by withdrawing their funds. Still on the fence? Wondering where to start? We’ve got a handy primer below on how it works, and check out what happened when MoJo reporter Josh Harkinson tried moving his money out of Wells Fargo.

Why would I want to move my money out of my existing bank?
You’ll probably save money in the long run. According to a 2009 year study by the Filene Research Institute, the average credit union account holder paid $71.47 in annual fees, compared to $183.14 paid by the typical bank customer. And new restrictions on debit card fees imposed last month by the Dodd-Frank Act have sent banks scrambling for even more ways to nickel and dime their customers in pursuit of profits. Nonprofit credit unions, on the other hand, only need to break even. They also tend to plow their money back into basic loans in their own communities, instead of dabbling in the kind of complex and risky securitized investments that caused large banks to go bust and drag down the economy. It’s important to note that credit unions and small local banks aren’t recession-proof: a striking 17 percent of Florida’s bank failures since 2008 were community banks.
What’s the process?
Don’t expect to be able to open a credit union account and close your old bank account in one day. You’ll need to receive new checks and a debit card in the mail, switch over any automated deposits and electronic bill paying services, and wait for pending financial transactions to clear. Only then should you give your old bank the boot. Here’s a searchable map that locates credit unions near you.
How long does it take?
You’ll probably need to wait one or two weeks to get a debit card and checks in the mail, though some credit unions will issue you temporary versions. Besides that, it’s just a matter of finding the time to switch over your bills.
Aren’t credit unions less convenient than big banks?
Not necessarily. While individual credit unions typically have fewer branches than corporate banks, many participate in “shared branching,” allowing customers to make a deposit or withdrawal at other participating credit unions. Also, many credit unions have implemented advanced online banking options including direct deposit, online bill-pay, and mobile banking using your cell phone.
What about ATMs?
Ask your local credit union if it’s a member of the Co-op Network. Customers at credit unions in the network can use a smart phone app to find any one of 24,000 fee-free ATMs across the country. “You actually get access to more fee-free ATMs than if you were at Bank of America,” says Ben Rogers, research director for the Filene Research Institute, a think tank that studies credit unions. Some credit unions will even refund any fees that you rack up using other banks’ ATMs.
If everyone moves their money out of big banks, how much money do the banks stand to lose?
Currently, total deposits for all banks and savings and loans, including personal and business accounts, come to $7.5 trillion.
Are big banks freaking out over this?
Most big banks rely on their vast numbers of personal checking and savings accounts to shore up their cash reserves and make lucrative investments. “If everybody moved their money, it would make a huge difference,” Rogers says. Still, the nearly 80,000 people who’ve made online pledges to join Bank Transfer Day probably won’t cause bankers to break a sweat—at least not yet. Add another 400,000 of them, and “you’d get not just frowns, but maybe gasps in the boardroom.”
How are credit unions benefiting from this?
Credit unions across the country have added upwards of 650,000 new customers since September 29 (the day Bank of America unveiled its now-defunct $5 monthly fee for debit cards), according to a survey of 5,000 credit unions by the Credit Union National Association. The group also estimates that credit unions have added $4.5 billion in new savings since then, likely from these new members and transfers from other banks. But CUNA spokesman Patrick Keefe says these numbers barely move the needle for big banks: “It’s actually a drop in the ocean for them. They are huge.”
Is there any scenario in which my big bank actually benefits if I do this?
Yes and no. If you have about $400 in a savings account and average about $1,000 in a checking account and have nothing else with your bank, then you’re probably what your bank would call an “unprofitable customer.” But most banks want to keep unprofitable customers onboard in hopes of later cross-selling them on credit cards and loans. “I don”t think that there’s a ton of banks actively smiling and smirking because they are scaring away all these unprofitable customers,” Rogers says. “Nobody really wants to lose customers.”