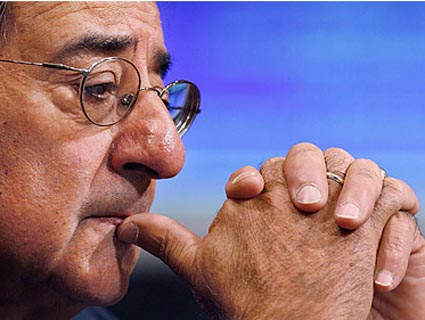 The detainee provisions may “needlessly complicate efforts by frontline law enforcement professionals to collect critical intelligence concerning operations and activities within the United States,” Panetta wrote in a letter first reported on by the Associated Press, and “restrains the Executive Branch’s options to utilize, in a swift and flexible fashion, all the counterterrorism tools that are now legally available.” (The detainee provisions would also authorize the indefinite military detention of American citizens suspected of being members of Al Qaeda or an “associated force.”)

At a press briefing yesterday, Pentagon spokesman Capt. John Kirby said Panetta had not yet recommended vetoing the bill. “He has not, to our knowledge, recommended to veto this,” Kirby said. “Again, he really—he wants to work with them as they move forward [on] this.” Critics of the bill contend that the administration’s skittishness in issuing veto threats suggests that the White House’s warnings about the bill’s detention provisions won’t be taken seriously by Congress.

“If Congress is going to take the president seriously, it has to believe the president is prepared to use the National Defense Authorization Act as toilet paper,” says Ben Wittes, a senior fellow at the Brookings Institution. “If it’s not convinced of that, the president has given away his negotiating leverage.”

In an interview with the Associated Press, Senator Lindsey Graham suggested that the armed services committee had altered the bill in response to the administration’s concerns:

The military custody provision has been changed to accommodate what I thought were some legitimate concerns of the administration…There’s been a criminalization of the war that makes a lot of members uncomfortable and this is congressional involvement that brings balance.

The Obama administration has largely maintained the trajectory of Bush-era policies on national security, and the detention provisions represent a substantial militarization of the Bush-Obama policy, not a return to the status quo ante. Moreover, the White House threatened a veto over similar detention provisions in the House version of the defense bill in May. White House counterterrorism adviser John Brennan blasted the detainee provisions in September, and Pentagon Counsel Jeh Johnson criticized them in a speech at the Heritage Foundation in October. Graham is concern-trolling the White House.

“What has to happen is the president needs to express that this is something that they’re going to veto over, and make very clear that threat is real,” says ACLU Legislative Counsel Chris Anders. “These are provisions that really deserve a veto if they end up on the president’s desk.”