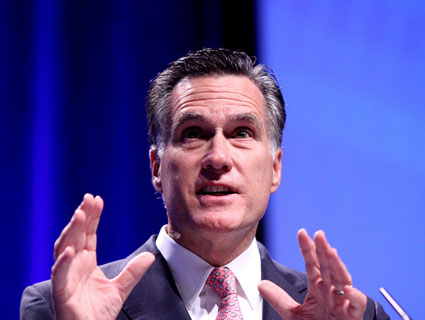 Since the GOP presidential primary season began, Mitt Romney has been helped by a Republican field filled with candidates whose penchant for gaffes has largely obscured Romney’s less dramatic misstatements. That was the case in Saturday’s foreign policy debate, where there was so much flailing happening that reporters barely noticed Romney offering up a howler of his own.

It’s not quite as dramatic as Herman Cain trying to remember what his position is on Libya, but twice during the debate, in response to a question about Iran, Romney spoke of the need to aid Iran’s “insurgents.”

Well, it’s worth putting in place crippling sanctions. It’s worth working with the insurgents in the company to encourage regime change in the country. And if all else fails, if after all of the work we’ve done, there’s nothing else we can do beside mil– take military action, then of course you take military action. It is unacceptable for Iran to have a nuclear weapon.

We will not allow Iran to have a nuclear weapon. This term “unacceptable” has been applied by several presidents over history, and our current president has made it very clear that he’s not willing to do those things necessary to get Iran to be dissuaded from their nuclear folly. I will take a different course. I will make sure that the sanctions, diplomatic pressure, economic pressure, and support of insurgents within the country help them become dissuaded to get away from their nuclear ambition…

There is no insurgency in Iran. There’s the non-violent Green Movement opposition that emerged in the aftermath of Iran’s 2009 presidential election, but there are no “insurgents.” It’s possible that Romney simply misspoke and meant “dissidents,” but one would expect Romney, who spent much of the debate agitating for war with Iran, to have some basic idea of the nature of the domestic political opposition in a country he’s advocated bombing for nearly four years.

As Steve Benen noted on Monday, Romney seems to be benefiting from an unearned presumption of competence, namely the idea that Romney knows what he’s talking about even when he doesn’t. That sort of aura can only be enhanced when the other candidates are declaring that the ACLU is running the CIA, dropping one world-government conspiracy theories, and urging that the US become less reliant on oil from Iran it doesn’t buy.