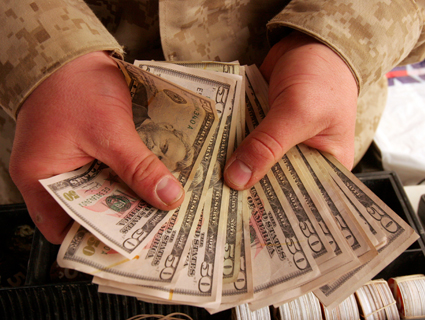 Capitol Hill conservatives and Pentagon brass fighting cuts to defense spending have argued that the military is limping off the battlefield with decrepit hardware. It’s quite the sob story: At a hearing last week, Rep. Buck McKeon (R-Calif.), the chair of the House armed services committee, cut his remarks short to literally cry for “these young men that are going outside the wire over in Afghanistan, every day on patrol.”

But a new report shows the US defense establishment is in much better shape than it claims: The DOD has blown roughly $1 trillion on shiny new tanks, ships, and jets since the 9/11 attacks—and it’s often done so with dollars that were supposed to be spent on those troops on the battlefield in Iraq and Afghanistan.

The Stimson Center study, “What We Bought: Defense Procurement From FY01 to FY10” (PDF), says the military is hardly in dire straits when it comes to funding its big-ticket items. “The services capitalized on funding to modernize their forces, especially the major weapons programs that constitute the heart of the services’ capabilities,” writes the report’s author, Russell Rumbaugh—a retired Army officer and ex-CIA military analyst.

The study shows there’s one big reason the brass are concerned about budget-cutting discussions in Congress: They’ve been double dipping into the taxpayer’s pocket to finance weapons purchases. Of the roughly $1 trillion spent on gadgetry since 9/11, 22 percent of it came from “supplemental” war funding—annual outlays that are voted on separately from the regular defense budget. Those bills are primarily intended to keep day-to-day operations running in Iraq and Afghanistan—meaning that if a member of Congress votes against a supplemental spending bill, she exposes herself to charges that she doesn’t “support the troops” in harm’s way.

But once the services got the supplemental money, they managed to spend $232.8 billion of it back home on the manufacture of costly weapons like Abrams heavy battle tanks and the troubled F-22 jet fighter—neither of which has proven particularly useful in counterinsurgency warfare. The amount of supplemental spending is represented below by light blue: 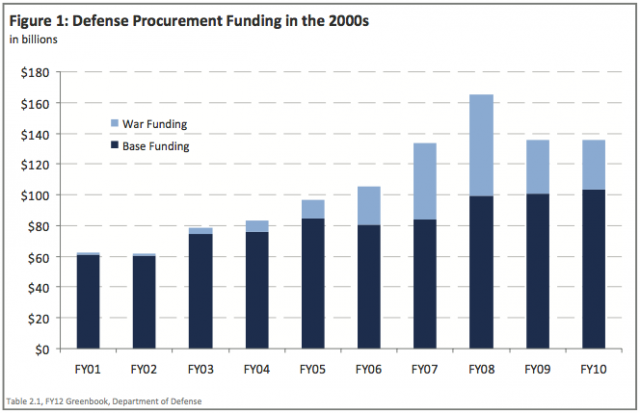 As Time‘s Mark Thompson points out on the Battleland blog, as the trimming of the base defense budget becomes a reality, the winding-down of the wars and their supplemental funding represents a double whammy for US weapons manufacturers: “[A]s the supplementals evaporate, there won’t be those extra billions hidden away in the Pentagon cookie jar for new and improved arms.”

So what has the military gotten with all that taxpayer money? A thoroughly modern and formidable force, writes the Stimson Center’s Rumbaugh: “[A]fter reviewing what procurement funding bought in the past decade, it is clear the military successfully modernized its capabilities, especially in building on existing systems and incorporating those not even anticipated.” Maybe so, but Rumbaugh runs down each service’s list of purchased goodies, and some of the pork appears especially fatty. Take this chart of historical Air Force spending on fighter jets, for example: 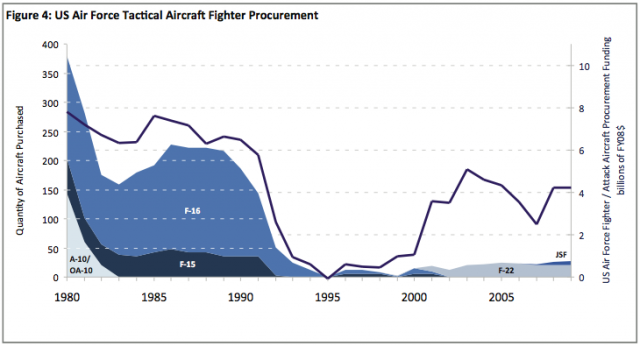 New-fangled jets like the F-22 and the Joint Strike Fighter have been so problem-ridden that production has slowed to a trickle. “The Air Force simply has not bought its next-generation fighter in numbers that match its acquisition of previous generations of fighters,” Rumbaugh writes, but “[t]his is not to say that the Air Force did not spend significant amounts on fighters.” He crunches some more numbers:

So there you have it. Is the military in a bad way when it comes to staying up-to-date? Not really. But is it paying through the nose for what it gets nowadays? Absolutely. Perhaps if congressional conservatives and generals attacked military contractors the way they attack defense-budget hawks, they could afford their guns and butter.