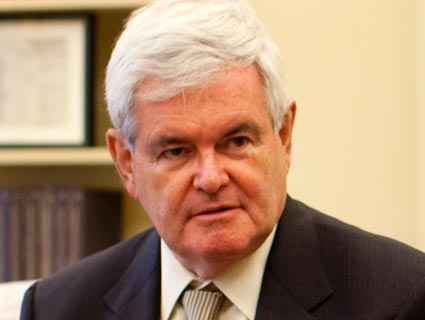 Newt Gingrich came out as an immigration moderate during Tuesday night’s CNN GOP foreign policy debate, urging his colleagues to consider the consequences of mass deportation of unauthorized immigrants who have been in the country for a long time. Gingrich said that as the party of “the family,” the GOP shouldn’t be involved in breaking up families. The Obama administration has deported more than a million unauthorized immigrants, drawing harsh criticism from immigration reform advocates.

To be sure, Gingrich is no liberal when it comes to immigration. While Gingrich suggested an exception for some unauthorized immigrants who have remained in the US for years, he still called for expelling all recent undocumented immigrants, implementing a guest worker program, and establishing an employer verification system. He also suggested that a military-only version of the DREAM Act that would provide a path to citizenship to unauthorized immigrants brought here as children. That sounds a lot like what President George W. Bush wanted to do when he proposed immigration reform during his second term in office.

Romney at first said he opposed amnesty because it would be a “magnet” for further illegal immigration. (He supported Bush’s immigration reform proposal last time around.) After Gingrich spoke rather specifically about policy, however, Romney backed down and said he wasn’t going start saying who was going to be allowed to stay and who wasn’t. After all, he’s running for office, for pete’s sake.

Gingrich’s moderation on immigration may put his newly crowned front-runner status at risk. Rick Perry’s slide in the polls began after he suggested critics of his decision to extend in-state tuition rates to unauthorized immigrants brought to the US as children were “heartless.” Gingrich, however, came across far more knowledgeable on the issue and managed to state his position without implying his critics were callous or racist. That may make some difference.

“I’m willing to be tough, but I’m not willing to kid people,” Gingrich told CNN anchor Gloria Borger after the debate.