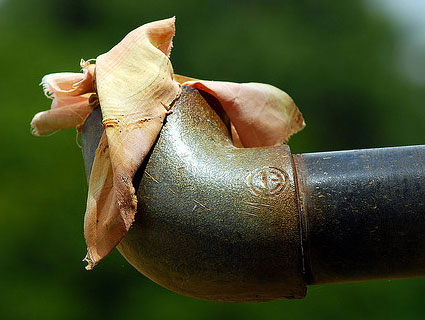 Days after State Department officials agreed to reexamine their own report on the Keystone XL oil pipeline, the Obama administration announced this afternoon a 12-to-18-month delay on the deadline for the pipeline’s approval. Originally expected by the end of this year, the administration will have until after the 2012 elections to give (or not) a final go-ahead, pending further study of the pipeline’s environmental impact.

Bill McKibben, a Mother Jones contributor and founder of the environmental activist group 350.org, called the decision “an unspoken salute to the power of people who came together in the open to demand action” in a statement released this morning.

“We take courage from today’s announcement,” McKibben said, adding however that “if this pipeline proposal re-emerges from the review process intact we will use every form of nonviolent civil disobedience to keep it from ever being built.”

The pipeline, which would carry oil from Canada’s tar sands 1,700 miles to refineries in Texas, has faced stiff opposition from environmental groups over concerns about potential spills, the large carbon footprint of tar sands oil relative to other extraction methods, and possible conflicts of interest between the administration and TransCanada, the company behind the proposed pipeline.

Earlier this week, State Dept. officials had indicated they would consider rerouting the pipeline to avoid Nebraska’s ecologically sensitive San Hills region and the Ogallala aquifer, a critical source of drinking and agricultural water for the region. “Concern about the proposed route’s impact on the Sand Hills of Nebraska has increased significantly over time,” the State Dept. announcement read.

TransCanada chief executive Russ Girling criticized the delay, asking: “How long will those customers wait for Canadian crude oil to get to the marketplace before they sort of throw up their hands and say this is just never going to happen?”

Susan Casey-Lefkowitz of the Natural Resources Defense Council said she did not consider the delay a cop-out by the president, for whom the pipeline has become an environmental litmus test in the run-up to his reelection bid. “It shows he’s been listening to the voices of the American people,” she said. “And that’s a really critical part of the process.”

Below, click on the interactive map’s hot spots to read more about the proposed pipeline route:

Starting in Hardisty, Alberta, TransCanada’s Keystone XL Pipeline would pump 900,000 barrels of crude a day to refineries in Texas. Extracted from Canada’s tar sands, the crude is some of the dirtiest in the world, with a carbon footprint 20 percent higher (PDF) than conventional oil’s.

Because the pipeline crosses the border, it needs State Department approval. Secretary of State Hillary Clinton has said she’s “inclined to” okay the project in early 2011. Environmental groups are pleading with her to wait. Last July, the EPA flagged the Keystone XL proposal (PDF) for further review, citing concerns over air pollution, public safety, and spills.

The Keystone XL would cross more than 70 rivers and streams (PDF), including the Missouri, Platte, and Arkansas.

TransCanada has told Nebraska landowners (PDF) it will claim eminent domain if they don’t let its pipeline pass through their land. “Some of the neighbors, they just said, ‘There’s no way to fight an oil company—we just have to sign off,'” says Merrick County farmer Randy Thompson.

The Ogallala Aquifer, which provides nearly one-third of the groundwater used to irrigate US crops, lies directly in the Keystone XL’s path. The pipeline would run four feet below the surface, which could pose a hazard in areas with shallow water tables. “Anytime it leaked, it would go directly into the water supply,” says Thompson.

Residents near the pipeline’s Texas terminals say there’s been little public notice from TransCanada. Karla Land, who lives outside Houston near the site of a major 1994 pipeline explosion (PDF), isn’t impressed by the promise of shut-off valves every 20 miles. In case of a rupture, she says, “20 miles worth of oil is going to come out of it.”

The Keystone XL is expected to cost $12 billion—but is it worth it? Three American companies, including two Kansas refiners, are suing TransCanada, claiming they’re being overcharged for using its pipelines. If tar-sand oil exports keep growing at current rates, the Keystone pipeline and other Canada-US pipelines won’t reach full capacity until 2038. The Keystone XL, scheduled for completion in 2013, would not hit capacity until 2056.

The Keystone XL would supplement the existing Keystone pipeline, which went into operation last summer and can carry up to 435,000 barrels of oil a day. Sections of it were built with steel produced by an Indian manufacturer later found to have supplied defective steel (PDF) for other US pipelines.
The federal government has 88 inspectors overseeing 2.3 million miles of gas and oil pipelines. Between 2000 and 2009, there were 2,800 pipeline accidents, causing 160 deaths and more than $3.2 billion in damages. Maximum fine? $1 million.

TransCanada says the new 1,661-mile pipeline is crucial for America’s energy independence: “Oil will flow from America’s good friend and neighbor—Canada—to help replace the five million barrels of oil the US imports daily from the Mideast and Venezuela.”