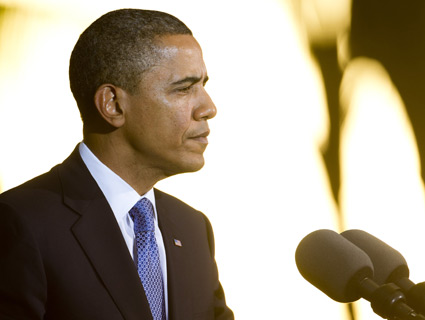 The detention provisions in the Senate version of the defense spending bill authorize the indefinite military detention of American citizens, and requires that any non-citizen terrorism suspect be held in military custody. It also forces the Secretary of Defense to personally approve transfers of detainees out of Gitmo*. When the bill was introduced, it created a rare moment of consensus between former Bush administration officials and civil liberties advocates who warned against constraining the president’s “flexibility” in counterterrorism operations.

The administration’s statement harshly criticizes the bipartisan Senate compromise hammered out by the Senate Armed Services Committee, noting that rather than take out provisions that critics warned would impede the ability of law enforcement agencies to investigate and apprehend terrorism suspects, the committee’s revised language merely “directs the President to develop procedures to ensure the myriad problems that would result…do not come to fruition.”

The section on detention provisions concludes with the statement that “any bill that challenges or constrains the President’s critical authorities to collect intelligence, incapacitate dangerous terrorists, and protect the Nation would prompt the President’s senior advisers to recommend a veto.”

Secretary of Defense Leon Panetta warned the Senate earlier this week that the provisions would harm national security, but until now it was unclear whether the administration would threaten to veto the defense bill over the Senate detention language. Senate Majority Leader Harry Reid has indicated he wants to pass the bill as soon as possible.

UPDATE: In his floor statement, Senate Armed Services Committee Chairman Carl Levin (D-Mich) said that “the Administration and others expressed misgivings about the detainee provisions in the initial bill, although the provisions in our initial bill represented a bipartisan compromise that was approved by the Committee on a 25-1 vote. Many of these concerns were based on misinterpretations of the language in that bill. Nonetheless, we have worked hard to address these concerns…I look forward to working with my colleagues to promptly pass this important legislation. “

*A previous version of this post incorrectly states that the bill would prohibit transfers of Gitmo detainees to US soil for trial.